Over the last ten or more years since 9/11, despite any spike in terrorism on our soil, Americans have easily acquiesced to substantially invasive national security measures. Inspections, body searches, surveillance, torture, loss of constitutional liberties–Americans shrug their shoulders and expend little, if  any, energy worrying about it.  Glenn Greenwald gives some great examples of this passive compliance and acceptance. —BPR Editor 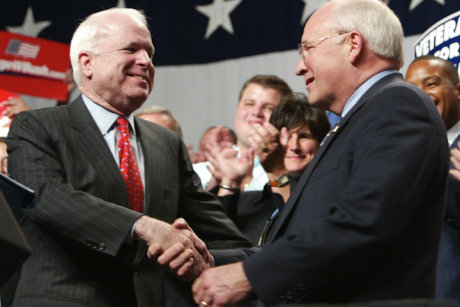 Remember when, in the wake of the 9/11 attack, the Patriot Act was controversial, held up as the symbolic face of Bush/Cheney radicalism and widely lamented as a threat to core American liberties and restraints on federal surveillance and detention powers? Yet now, the Patriot Act is quietly renewed every four years by overwhelming majorities in both parties (despitesubstantial evidence of serious abuse), and almost nobody is bothered by it any longer. That’s how extremist powers become normalized: they just become such a fixture in our political culture that we are trained to take them for granted, to view the warped as normal. Here are several examples from the last couple of days illustrating that same dynamic; none seems overwhelmingly significant on its own, but that’s the point:

After Dick Cheney criticized John McCain this weekend for having chosen Sarah Palin as his running mate, this was McCain’s retort:

Look, I respect the vice president. He and I had strong disagreements as to whether we should torture people or not. I don’t think we should have.

Isn’t it amazing that the first sentence there (“I respect the vice president”) can precede the next one (“He and I had strong disagreements as to whether we should torture people or not”) without any notice or controversy? I realize insincere expressions of respect are rote ritualism among American political elites, but still, McCain’s statement amounts to this pronouncement: Dick Cheney authorized torture — he is a torturer — and I respect him. How can that be an acceptable sentiment to express? Of course, it’s even more notable that political officials whom everyone knows authorized torture are walking around free, respected and prosperous, completely shielded from all criminal accountability. “Torture” has been permanently transformed from an unspeakable taboo into a garden-variety political controversy, where it shall long remain.

Equally remarkable is this Op-Ed from The Los Angeles Times over the weekend, condemning President Obama’s kill lists and secret assassinations:

Allowing the president of the United States to act as judge, jury and executioner for suspected terrorists, including U.S. citizens, on the basis of secret evidence is impossible to reconcile with the Constitution’s guarantee that a life will not be taken without due process of law.

Under the law, the government must obtain a court order if it seeks to target a U.S. citizen for electronic surveillance, yet there is no comparable judicial review of a decision to kill a citizen. No court is even able to review the general policies for such assassinations. . . .

But if the United States is going to continue down the troubling road of state-sponsored assassination, Congress should, at the very least, require that a court play some role, as the Foreign Intelligence Surveillance Court does with the electronic surveillance of suspected foreign terrorists. Even minimal judicial oversight might make the president and his advisors think twice about whether an American citizen poses such an “imminent” danger that he must be executed without a trial.

Isn’t it amazing that a newspaper editorial even has to say: you know, the President isn’t really supposed to have the power to act as judge, jury and executioner and order American citizens assassinated with no transparency or due process? And isn’t it even more amazing that the current President has actually seized and exercised this power with very little controversy? Recall that when The New York Times first confirmed Obama’s targeting of citizens for assassinations in 2010, it noted, citing “officials,” that “it is extremely rare, if not unprecedented, for an American to be approved for targeted killing.” No longer. That presidential power — literally the most tyrannical power a political leader can seize — is also now a barely noticed fixture of our political culture.

Meanwhile, we have this, from the Associated Press yesterday: 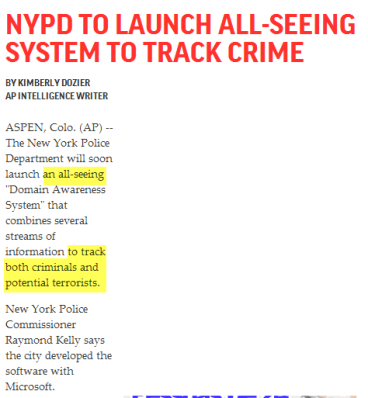 Remember when John Poindexter’s “Total Information Awareness” program – which was “to use data mining technologies to sift through personal transactions in electronic data to find patterns and associations connected to terrorist threats and activities”: basically create real-time surveillance of everyone – was too extreme and menacing even for an America still at its peak of post-9/11 hysteria? Yet here we have the NYPD — more than a decade removed from 9/11 — announcing a very similar program in very similar terms, and it’s almost impossible to envision any real controversy.

Similarly, in the AP’s sentence above describing the supposed targets of this new NYPD surveillance program: what, exactly, is a “potential terrorist”? Isn’t that an incredibly Orwellian term given that, by definition, it can include anyone and everyone? In practice, it will almost certainly mean: all Muslims, plus anyone who engages in any activism that opposes prevailing power factions. That’s how the American Surveillance State is always used. Still, the undesirability of mass, “all-seeing,” indiscriminate surveillance regime was a given — a view, in sum, that the East German Stasi was a bad idea that we would not want to replicate on American soil — yet now, there is almost no limit on the level of state surveillance we tolerate.