The media now knows that “militant” is a term of official propaganda, yet still use it for America’s drone victims

Earlier this week, The New York Times reported that the Obama administration, in order to conceal civilian deaths caused by their drone attacks, “counts all military-age males in a strike zone as combatants.” Although I wrote at length about the NYT‘s various revelations, Iwrote separately about that specific disclosure, in order to emphasize the implications for media outlets reporting on American drone attacks:

What kind of self-respecting media outlet would be party to this practice? Here’s the New York Times documenting that this is what the term “militant” means when used by government officials. Any media outlet that continues using it while knowing this is explicitly choosing to be an instrument for state propaganda.

Early this morning, the U.S. fired a missile from a drone in northwest Pakistan — its first since the NYT story – and killed two people. Here’s how The Washington Post is now touting the article about this attack on its online front page:

Readers who click on that story are greeted by an Associated Press story bearing this headline:

There is, as usual, no indication that these media outlets have any idea whatsoever about who was killed in these strikes. All they know is that “officials” (whether American or Pakistani) told them that they were “militants,” so they blindly repeat that as fact. They “report” this not only without having the slightest idea whether it’s true, but worse, with the full knowledge that the word “militant” is being aggressively distorted by deceitful U.S. government propaganda that defines the term to mean: any “military-age males” whom we kill (the use of the phrase “suspected militants” in the body of the article suffers the same infirmity). 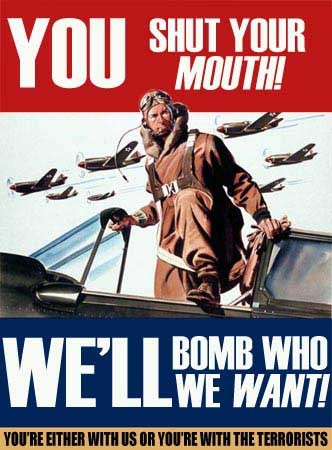 How is it possible to have any informed democratic debate over a policy about which the U.S. media relentlessly propagandizes this way? If drone strikes kill nobody other than “militants,” then very few people will even think about opposing them (and that’s independent of the fact that the word “militant” is a wildly ambiguous term — militant about what? — though it is clearly designed (when combined with “Pakistan”) to evoke images of those who attacked the World Trade Center). Debate-suppression is not just the effect but the intent of this propaganda: like all propaganda, it is designed to deceive the citizenry in order to compel acquiescence to government conduct.

In light of this week’s revelation about what “militant” actually means when used by “officials,” there really needs to be some concerted, organized campaign to target media outlets every time they use the term this way. Because this particular article lacks a byline, one way to start here would be to complain to the Washington Post Ombudsman (whose contact information is in the last line here) and to Associated Press (at the email listed here). In the meantime, I’ve contacted AP requesting a response, and will work on a more organized effort to target media outlets every time they do this. This is nothing short of a deliberate government/media misinformation campaign about an obviously consequential policy.

Speaking of propaganda, the media watchdog group FAIR notes what was entirely predictable (and specifically predicted): that MSNBC — with the exception of a brief discussion on Morning Joe and this quite good monologue from Ari Melber on The Dylan Ratigan Show – never once mentioned to their progressive audience any of the NYT‘s highly disturbing revelations about President Obama’s “kill list” (even as they droned on and on and on about audience-pleasing trivialities such as Donald Trump’s malice). FAIR adds: “In fact, a far more interesting discussion of these questions can be heard on Fox News Channel,” including “a soundbite from the ACLU to illustrate criticism from the left.” [Chris Hayes, on his morning weekend show, is, as usual, a noble exception].

For those who missed it, here is Stephen Colbert’s three-minute monologue from Thursday night on the way in which the Obama administration has re-defined “militant”:   CLICK HERE

UPDATE: Chris Woods, Senior Reporter with the Bureau of Investigative Journalism, which has done sterling work in documenting drone attacks in Pakistan, emails today to say this:

Today’s strike is far from clear right now: maybe one – or two events. May also involve civilian deaths (Dawn reports that the motorbike was accidentally hit). . . .

There’s also an obverse to this coin. As well as reporting all those killed as “militants”, the mainstream US media is consistently failing to report when civilians are credibly reported killed, even as media internationally do so.

Excepting today, civilians have only been reported killed twice in Pakistan in 2012, from 17 attacks (February 9 and May 24). On both occasions civilian deaths were reported by major international agencies (Reuters, AP etc), and picked up worldwide (eg BBC, Jerusalem Post…) But not within the US. I can find no reference to civilian casualties in any mainstream US publication on either occasion (for the May 24 attack most also censored out the fact that a mosque was hit.)

So the US mainstream media is not only classing all victims – regardless of known status – as “militants.” It is actively censoring out actual reports of civilian deaths.

This is the same American media that loves to mock Pakistanis for being so very propagandized.