THE MOSQUE THAT DISAPPEARED 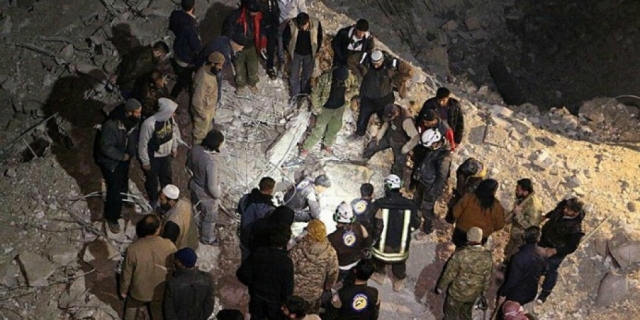 Civil defense team members and people try to rescue people who were trapped under the debris of a Mosque after an aerial attack on a mosque during prayer in the Cina village of Etarib district of Aleppo, Syria on March 16, 2017.  (Photo: İbrahim Ebu Leys/ Anadolu Agency )

We committed a quiet little war crime the other day. Forty-plus people are dead, taken out with hellfire missiles while they were praying.

Or maybe not. Maybe they were just insurgents. The women and children, if there were any, were . . . come on, you know the lingo, collateral damage. The Pentagon is going to “look into” allegations that what happened last March 16 in the village of al-Jinah in northern Syria was something more serious than a terrorist takeout operation, which, if you read the official commentary, seems like the geopolitical equivalent of rodent control.

The target was “assessed to be a meeting place for al-Qaeda, and we took the strike,” a spokesman for the U.S. Central Command explained. The strike involved two Reaper (as in Grim Reaper) drones and their payload of Hellfire missiles, plus a 500-pound bomb.

The target, at least according to human rights organizations and civilians on the ground, was a mosque during prayer hour.

“U.S. officials said the strikes . . . had killed ‘dozens’ of militants at a meeting of the terrorist group,” according to the Washington Post. “But local activists and a monitoring group reported that at least 46 people died, and more were trapped under rubble, when the attack struck a mosque during a religious gathering. . . . Photos from the area showed rescue workers pulling mangled bodies from a mound of rubble.”

One local resident told Agence France-Presse: “I saw 15 bodies and lots of body parts in the debris when I arrived. We couldn’t even recognize some of the bodies.”

“Global humanity, led by the United States of America, the planet’s primo superpower, is devolving into a state of perpetual war. It has caged itself into unending self-hatred.”

During the 30 seconds of attention the story garnered, the controversy was whether it was a mosque that was hit or a building across the street from a mosque. The Pentagon even declassified a photo of the bombing aftermath, showing that a small building near the ghastly bomb crater was still standing. However, according to The Intercept: “Activists and first responders say the building that was targeted was a part of the mosque complex — and that the charred rubble shown in the photo was where 300 people were praying when the bombs began to hit.”

Anyway, the news cycle moved on. My initial thought, as I read about the bombing, which was not described as a massacre or slaughter in the mainstream headlines, but remained an “incident,” is that the media have a default agreement on morality: Killing’s OK as long as it’s emotionless, coldly rational and strategic (even if mistakenly so). This is the American way. Coldly strategic murder can be reported in such a way that it fits into the global infrastructure of safety and the control of evil.

But killing is bad if there’s passion involved. Passion is easily linked to “extremism” and wrongthink. The man killed this month by police at Paris’ Orly Airport, for instance, had cried, “I am here to die for Allah — there will be deaths.”

This fits neatly into the moral certainty of the Western world. Compare this to military PR talk, also reported in The Intercept: “The area,” according to a U.S. Navy spokesperson, “was extensively surveilled prior to the strike in order to minimize civilian casualties.”

“The media have a default agreement on morality: Killing’s OK as long as it’s emotionless, coldly rational and strategic…”

In both cases, the perpetrators foresaw dead bodies left in the wake of their action. Nevertheless, the American military machine carefully avoided the public’s, or the media’s, moral disapproval. And geopolitics remains a game of good vs. evil: as morally complex as 10-year-old boys playing cowboys and Indians.

What I had not foreseen was how quickly the story would disappear from the news cycle. It simply couldn’t compete with the Trump cacophony of tweets and lies and whatever else passes for the news that America consumes. This adds a whole new dimension of media indifference to the actual cost of war, but I guess no nation could wage endless war if its official media made a big deal out of every mosque or hospital it (mistakenly) bombed, or put human faces on all its collateral damage.

I write this with sarcasm and irony, but what I feel is a troubled despair too deep to fathom. Global humanity, led by the United States of America, the planet’s primo superpower, is devolving into a state of perpetual war. It has caged itself into unending self-hatred.

“The way in which U.S. militarism is taken for granted,” Maya Schenwar writes at Truthout, “mirrors the ways in which other forms of mass violence are deemed inevitable — policing, deportation, the genocide and erasure of Indigenous peoples, the exploitative market-driven health care system, the vastly inequitable education system and disastrous environmental policies. The generally accepted logic tells us that these things will remain with us: The best we can hope for, according to this narrative, is modest reform amid monstrous violence.

“We have to choose,” she says, “life-giving priorities over violent ones. We have to stop granting legitimacy to all forms of state violence.”

Yes, yes, but how? The necessity of war has not been challenged at official levels of power in this country in more than four decades. The corporate media grants legitimacy to state violence more by what it doesn’t say than by what it does. Bombed mosques simply disappear from the news and, voila, they never happened. Liars had a global forum to promote the invasion of Iraq, while those who questioned it had to loose their outrage from street corners. “Collateral damage” is a linguistic blur, a magician’s cape, hiding mass murder.

And Donald Trump is under the control of the militarized far right as well as his own clueless immaturity. Of course his new budget, released, as Schenwar points out, on the anniversary of the My Lai Massacre, ups the military allotment by $54 billion and gouges social spending. As we protest and write letters to Congress and express our shock and awe at what is happening, let us keep in mind that Trump merely puts a face on America’s out-of-control militarism. He didn’t create it.

For the protests against his budget cuts to be effective, for the roiling turmoil to matter, a new country must be in formation.

3 Responses to THE MOSQUE THAT DISAPPEARED