In a NY Times Op-Ed, Jimmy Carter calls out the U.S. government (while carefully omitting President Obama’s name) for it’s worsening human rights record. The former American president and Nobel Peace Prize winner, clearly unafraid to speak his mind (Carter has criticized every one of his successors at one time or another) condemns the many violations of the U.S. Constitution and international treaties by the Bush and Obama administrations since September 11, 2001. We need many more fearless critics like Carter. — The BPR Editor

A Cruel and Unusual Record 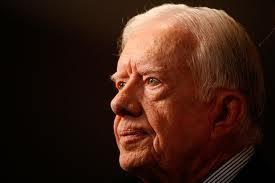 THE United States is abandoning its role as the global champion of human rights.

Revelations that top officials are targeting people to be assassinated abroad, including American citizens, are only the most recent, disturbing proof of how far our nation’s violation of human rights has extended. This development began after the terrorist attacks of Sept. 11, 2001, and has been sanctioned and escalated by bipartisan executive and legislative actions, without dissent from the general public. As a result, our country can no longer speak with moral authority on these critical issues.

While the country has made mistakes in the past, the widespread abuse of human rights over the last decade has been a dramatic change from the past. With leadership from the United States, the Universal Declaration of Human Rights was adopted in 1948 as “the foundation of freedom, justice and peace in the world.” This was a bold and clear commitment that power would no longer serve as a cover to oppress or injure people, and it established equal rights of all people to life, liberty, security of person, equal protection of the law and freedom from torture, arbitrary detention or forced exile.

The declaration has been invoked by human rights activists and the international community to replace most of the world’s dictatorships with democracies and to promote the rule of law in domestic and global affairs. It is disturbing that, instead of strengthening these principles, our government’s counterterrorism policies are now clearly violating at least 10 of the declaration’s 30 articles, including the prohibition against “cruel, inhuman or degrading treatment or punishment.”

Recent legislation has made legal the president’s right to detain a person indefinitely on suspicion of affiliation with terrorist organizations or “associated forces,” a broad, vague power that can be abused without meaningful oversight from the courts or Congress (the law is currently being blocked by a federal judge). This law violates the right to freedom of expression and to be presumed innocent until proved guilty, two other rights enshrined in the declaration.

In addition to American citizens’ being targeted for assassination or indefinite detention, recent laws have canceled the restraints in the Foreign Intelligence Surveillance Act of 1978 to allow unprecedented violations of our rights to privacy through warrantless wiretapping and government mining of our electronic communications. Popular state laws permit detaining individuals because of their appearance, where they worship or with whom they associate.

Despite an arbitrary rule that any man killed by drones is declared an enemy terrorist, the death of nearby innocent women and children is accepted as inevitable. After more than 30 airstrikes on civilian homes this year in Afghanistan, President Hamid Karzai has demanded that such attacks end, but the practice continues in areas of Pakistan, Somalia and Yemen that are not in any war zone. We don’t know how many hundreds of innocent civilians have been killed in these attacks, each one approved by the highest authorities in Washington. This would have been unthinkable in previous times.

These policies clearly affect American foreign policy. Top intelligence and military officials, as well as rights defenders in targeted areas, affirm that the great escalation in drone attacks has turned aggrieved families toward terrorist organizations, aroused civilian populations against us and permitted repressive governments to cite such actions to justify their own despotic behavior.

Meanwhile, the detention facility at Guantánamo Bay, Cuba, now houses 169 prisoners. About half have been cleared for release, yet have little prospect of ever obtaining their freedom. American authorities have revealed that, in order to obtain confessions, some of the few being tried (only in military courts) have been tortured by waterboarding more than 100 times or intimidated with semiautomatic weapons, power drills or threats to sexually assault their mothers. Astoundingly, these facts cannot be used as a defense by the accused, because the government claims they occurred under the cover of “national security.” Most of the other prisoners have no prospect of ever being charged or tried either.

At a time when popular revolutions are sweeping the globe, the United States should be strengthening, not weakening, basic rules of law and principles of justice enumerated in the Universal Declaration of Human Rights. But instead of making the world safer, America’s violation of international human rights abets our enemies and alienates our friends.

As concerned citizens, we must persuade Washington to reverse course and regain moral leadership according to international human rights norms that we had officially adopted as our own and cherished throughout the years.

Jimmy Carter, the 39th president, is the founder of the Carter Center and the recipient of the 2002 Nobel Peace Prize.