The Laughing Stock of the World

(Michael Moore recounts how a once-proud advancing nation is moving downward too quickly. Why do we not care about our poor and working class citizens? Our priorities are apparently helping the wealthy. Many countries make a point of helping their citizens. Isn’t that the purpose of government? It appears we don’t care enough.–TBPR Editor,  P.S. Don’t miss the video. Very enlightening!)

Why the world pities us and fears us

As the week drew to a close and President Biden desperately tried to get Congress to vote on his infrastructure bills (build roads, help people) before he headed to two major summits in Europe, pundits and corporatist Dems railed against the progressive lawmakers for holding things up. Of course the only people holding things up were two pro-wealthy Democratic senators — and every single Republican. The progressives? They were holding out on behalf of the vast majority of Americans whose lives would be turned around and vastly improved should Biden’s big bill pass.

Biden was beside himself to get something enacted before going to the G-20 summit and the COP-26 climate meeting. So he started tossing major pieces of his beloved bill overboard. He threw out paid family leave, got rid of free community college, took dental and eyeglasses away from the elderly and made a thousand other little cuts. He also decided the wealthy would not have to pay their true fair share of the taxes.

So Biden left for Europe without anything becoming law. In the weeks leading up to his trip, he (I mean the Republicans and the two lame Dems) also failed to raise the minimum wage and they failed to protect voting rights. The pundits howled. “Biden goes to Europe as a weakened president!” “Biden humiliated in front of the world!” “The US cannot govern itself and Biden enters these summits with America as the laughing stock amongst world leaders.”

Are the press and politicians that clueless as to why the world is laughing at us? I hate to tell you, it ain’t because of the roads and child tax credits. We are the laughing stock because we refuse to take care of our own people — and NO ONE around the world can understand why we force our old people to suffer and why we put our own children last. Not other country’s children. OURS!

I hate to reveal this secret, but here it goes:

Every one of the E.U. countries has:

•Universal free health care.
•Free or nearly-free college.
•Paid Family Leave for at least four months.
•Complete care of all elderly.
•Robust funding of schools.
•All sorts of help for the jobless and the poor.
•Workers enjoy mandatory paid vacation with a minimum of four weeks off (some countries are almost double that).
•Women having full equal rights. Abortion and birth control is free and easily available in all but two E.U. countries (Malta and Poland). Most of their constitutions have what we don’t have — an equal rights clause for all women.

The list goes on. And not just social safety net policies. Portugal has stopped mass incarceration and made possession of drugs legal — and has seen drug use go down because they treat drug addiction as a medical problem, not a crime.

Countries like Slovenia and Germany not only have free college, they will let any foreign student come there and attend college for free. Yes, you read that right. They will even let American students come to their countries and get a free four-year degree! What? You say you can’t speak Slovenian? No problem! They have a whole curriculum taught in English

Spain, France, Italy and others all have high speed affordable bullet trains.Cheap mass transit is everywhere.

In Austria you can vote at 16. Teenagers have held seats in the Austrian parliament!

In Norway, when you commit a crime you spend a few years going to school, learning a trade, making amends to those whom you’ve hurt — and no sentence can be longer than 21 years (including for the mass murderer of 77 people, mostly teenagers).

Yes, other countries have their own problems. But, while American school boards are enacting rules prohibiting teaching students about the history of American slavery, racism and genocide, these other countries REQUIRE its young people to be taught about their own evil past (and present) in the hopes that the next generation won’t make their parents’ mistakes. So German students are thoroughly enmeshed in learning about the Holocaust. French students are taught about their brutal colonial past in Algeria and Vietnam. Irish students are well aware of the abuse caused by the Catholic Church. Spanish students get courses on the evils of fascism and Spain’s fascist past. Antifa, you say? Right down the hall in Room 104, 3rd Hour social studies with Señora Valdez! 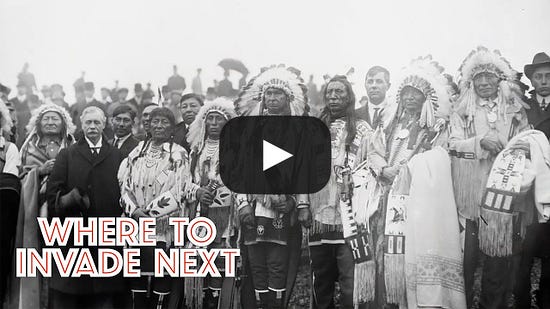 Yes, we are a laughing stock. Biden’s “humiliation” this week in Europe is that the nation he leads is a brute to its own people. It’s not that the other leaders are laughing at him. They feel sorry for him. They pity us. “Those poor Americans!” Most people around the world actually like us. They admire our creativity and inventiveness. Which makes their incredulity even worse — they simply can’t figure out why in a democracy we allow this misery to continue! Why we haven’t thrown the bastards out. Why 50+1 votes out of 100 senators isn’t called a majority. American math says 60 out of 100 is the majority. We look like idiots. The Europeans, the Japanese, the Australians, the Argentinians, the South Africans — they don’t hate us. They pity us and they cannot friggin’ figure us out.

And they fear us. Not because of our weapons and desire to invade other countries (although they should remain very, very afraid of that). No. They’re afraid because, if we treat our own people this way, if we require an enforced ignorance and teach lies to our students, then what they truly fear is what will happen to this planet if the wealthiest nation, the one blessed with the most resources on Earth, shits so easily and happily on itself. It is MIND-BOGGLING to the rest of the world that we are so hell-bent on destroying our Democracy and ourselves.

I do feel sorry for Joe Biden sitting on that world stage this week. But not because he couldn’t get an infrastructure bill passed. It’s because he has to sit there over Scottish tea and explain why our old people are now finally going to get to have free hearing aids! — but not glasses, and not a visit to the dentist. “You see,” Uncle Joe will explain, hanging his head, “in America, if you are old, you do have a right to hear — but not to see. And not to chew. God Bless America.”