Trump has turned words into weapons. And he’s winning the linguistic war

From ‘spygate’ to ‘fake news’, Trump is using language to frame – and win – debates. And the press operate like his marketing agency

Donald Trump has been a salesman for nearly half a century. He is now selling himself, his worldview and his self-serving views of the law and the truth. His principal tools are language and the media. By faithfully transmitting Trump’s words and ideas, the press helps him to attack, and thereby control, the press itself.

Trump knows the press has a strong instinct to repeat his most outrageous claims, and this allows him put the press to work as a marketing agency for his ideas. His lies reach millions of people through constant repetition in the press and social media. This poses an existential threat to democracy.

Language works by activating brain structures called “frame-circuits” used to understand experience. They get stronger when we hear the activating language. Enough repetition can make them permanent, changing how we view the world.

Even negating a frame-circuit activates and strengthens it, as when Nixon said “I am not a crook” and people thought of him as a crook.

Scientists, marketers, advertisers and salespeople understand these principles. So do Russian and Islamic State hackers. But most reporters and editors clearly don’t. So the press is at a disadvantage when dealing with a super salesman with an instinctive ability to manipulate thought by 1) framing first 2) repeating often, and 3) leading others to repeat his words by getting people to attack him within his own frame.

Language can shape the way we think. Trump knows this. Here are some of his favorite manipulation techniques.

First, he weaponizes words. The modifier “crooked” convicted Hillary Clinton without a trial. The media’s constant repetition sealed the verdict. “Fake news” proclaims that the news is fake. The use of “fake” is designed to delegitimize the press itself. Trump also uses strategic name-calling to undermine the Russia investigation, tagging it as a “witch-hunt” by the “deep state” in an attempt to shift blame. It’s false, but when the press repeats it, his narrative wins.

A possible immediate correction might have been to use “RussianSpyGate,” repeatedly focusing on the Russian contacts of Trump’s campaign aides Carter Page and George Papadopoulos, with the FBI informant checking on Russian spying in the Trump campaign. This would have had to be done over and over, with reporters bring it up whenever “spygate” was used. Not an easy fix.

Then there are what cognitive scientists call “salient exemplars” – well-publicized individual cases, where wide publicity leads the public to take them as having a high probability and typifying a whole class. Trump turns them into weaponized stereotypes. He is a master at defaming entire groups of people as liars, rapists, terrorists – or in the case of US law enforcement and intelligence agencies – agents of corruption. 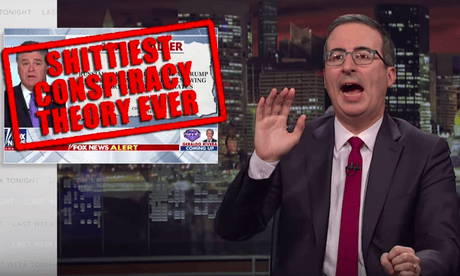 John Oliver on Mueller investigation: ‘If this is a witch-hunt, witches exist’

In The Art of the Deal, Trump discusses using “truthful hyperbole” – exaggerated claims suggesting a significant truth. His hyperbole can be either positive (“great”, “terrific”, “the best”) for what he likes or negative (“a disaster,” “the worst ever”) for what he dislikes. “The worst trade deal ever” frames trade agreements as “deals”, where “deals” are seen as zero-sum games that you either win or lose – and winning is the only good outcome. “Doesn’t it feel good to win!” “You’ll win so much, you’ll feel tired of winning!”

“America first” means that America is better than other countries, as shown by its wealth and power. And that wealth and power should be used to win – to acquire more wealth and power in all its “deals” – even with our allies. Power includes the power to bully or punish – for example, to impose tariffs or pull out of treaty – or at least threaten if others don’t go along with him.

Trump’s tweets are not random, they are strategic. There are four types: 1) Pre-emptive framing, to get a framing advantage. 2) Diversion, to divert attention when news could embarrass him. 3) Deflection: Shift the blame to others. And 4) trial balloon – test how much you can get away with. Reporting, and therefore repeating, Trump’s tweets just gives him more power. There is an alternative. Report the true frames that he is trying to pre-empt. Report the truth that he is trying to divert attention from. Put the blame where it belongs. Bust the trial balloon. Report what the strategies are trying to hide.

Cornered by the Russia investigation, Trump is working overtime to twist the facts, the law, and reality in general, to benefit himself. As the indictments and the evidence pile up in favor of a case for Trump-Russia collusion in the 2016 election, he’s made it clear that he considers himself above both the law and the truth. As president of the United States, anything he says – true or false – is faithfully parroted by the press. This needs to change.

Trump is subjecting American democracy to a brutal test. Our survival requires that the press halt its unwitting complicity in his power grab. The press has become complicit with Trump by allowing itself to be used as an amplifier for his falsehoods and frames. When the press gives Trump absolute power to dictate coverage, it abdicates its role as a pillar of democracy.

If Trump wants to blow up the world order, who will stop him?

How can the press do a better job? Here are some basic suggestions:

First, journalists must understand how propaganda works on the brain and grasp the cognitive science that marketers of propaganda have implicitly mastered: frames, metaphors, narratives and brain basics.

Second, keep a steely focus on the fact that American democracy is under attack by a foreign power, possibly with collusion from the sitting president’s campaign. This is a crisis. Certain rules don’t apply in a crisis, especially the rule that the press must amplify the president’s words, whatever they are.

Third, stop letting Trump control the news cycle. Newsgathering should be a serious affair controlled by editors whose power rivals any politician’s. Stop chasing his tweets and elevating every sideshow. Start every story with truth and the context of what’s really important to citizens in a democracy. More BBC, less TMZ.

Fourth, don’t spread lies. Don’t privilege Trump’s lies by putting their specific language in the headlines, the leads or the hashtags. Don’t repeat the lies assuming people will automatically know they’re lies. People need to know the president is lying, but be careful about repeating the lies because “a lie repeated often enough becomes the truth”. Repetition of lies spreads them.

The job of the free press is to seek the truth and report the truth, especially the morally important truths and their consequences. If the press fails to do this job, not only does it lose its freedom, but we all do.