Remedy for Russian meddling should be new election

It sounds like a story lifted from the pages of a spy novel. U.S. intelligence officials have concluded that Russian dictator Vladimir Putin led a cyberespionage scheme designed to help Donald Trump win the presidential election.

What’s even worse is that Putin’s plan worked and Trump now seems to be siding with Russia against U.S. intelligence agencies. It’s hard to know how to respond to this because it is unprecedented. But it is essential to take whatever action is necessary to make this right, as difficult, complicated and even uncomfortable as that may be.

The hard reality is that the presidential election we just held was delegitimized by foreign interference. This is not some conspiracy theory or fevered fantasy; it is a conclusion that flows directly from the unanimous assessments of the U.S. intelligence community.

It would be an enormous mistake to ignore this, as Trump has suggested we should.

In fact, if we can confirm the intelligence report’s conclusion that Putin intervened with the goal of electing Trump, there must be a new election in the United States.This sounds extraordinary, and of course it is. But it can be done, and indeed must be done in order to uphold the fundamental democratic principle of free and fair elections, a principle undermined by the Russian efforts. 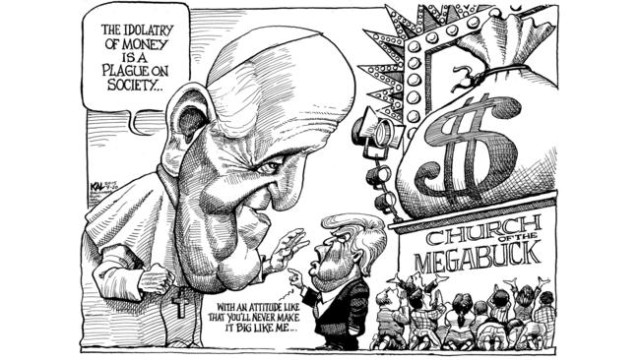 Last week, the U.S. Senate Armed Services Committee chaired by Sen. John McCain (R-Ariz.) began holding hearings about Russian interference in the election. The McCain hearings are a good start, but more action is needed, including most importantly the establishment of an independent, nonpartisan body along the lines of the 9/11 commission.

If such a commission confirmed the intelligence conclusions (while also exploring other questions), it would then seek to determine whether Russian interference affected the election outcome and gave Trump a victory.

Trump is desperately insisting that his election was legitimate, including by making misleading statements about the intelligence report’s conclusions. After receiving a briefing last week, Trump tweeted that “Intelligence stated very strongly there was absolutely no evidence that hacking affected the election results. Voting machines not touched!”

This is dangerously deceptive. U.S. intelligence concluded that Russian actions did not affect vote counting, but that wasn’t the point. Russia’s goal was what the intelligence report describes as “influence efforts.”

This included the use of propaganda to praise Trump and denigrate Democratic nominee Hillary Clinton, and, most insidiously, disseminating stolen data obtained through Russian cyberespionage. This included the content of emails stolen from the accounts of Democratic party officials and disseminated by Wikileaks.

Trump himself certainly believed the information spread by Wikileaks was helpful to his election chances; he talked about it incessantly on the campaign trail. In the last month of the election alone, Trump mentioned WikiLeaks 164 times. In an election decided by fewer than 100,000 votes in three states, it’s quite likely that Russia’s efforts did make a difference

Extensive news coverage often focused on WikiLeaks, which at the very least made it harder for Clinton to advance her own message, and at worst created confusion for voters and journalists who incorrectly thought the WikiLeaks story was connected to an FBI investigation of Clinton’s email server. Julian Assange timed the release of information to inflict maximum political damage on Clinton and the leaked emails succeeded in sowing discord among Democrats and causing tangible harm to the Clinton campaign.

It’s not the job of U.S. intelligence agencies to determine whether Russian hacking affected the US election results, and the intelligence report released last week did not resolve this. But an independent commission can and must answer this question.

If it is determined that Russian efforts did indeed put Trump over the top in an incredibly close election, then the next step would be to pass a constitutional amendment requiring a one-time special election to be held as soon as possible.

This would be far from easy, but it is possible with the support of a two-thirds majority in each chamber of Congress, followed with ratification by three-fourths of state legislatures. All of this is unlikely, to say the least — especially in light of the disappointing reality that most Republicans in Congress seem to be willing to let Russian election sabotage slide.

But it is well worth trying, as the alternative would be to accept the results of an election tainted by foreign interference. The choice should be clear: Let’s see if elected officials are courageous enough and patriotic enough to take whatever action is needed to set this right.

Chris Edelson is an assistant professor of government in American University’s School of Public Affairs. His latest book, “Power Without Constraint: The Post 9/11 Presidency and National Security,” was published in May 2016 by the University of Wisconsin Press.

The views expressed by contributors are their own and not the views of The Hill.