Another Person (Man) of the Year

Posted on December 8, 2016 by Arlen Grossman 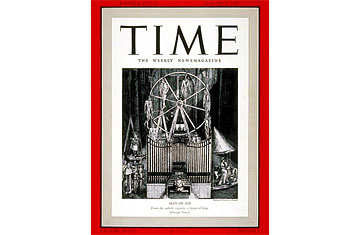 Greatest single news event of 1938 took place on September 29, when four statesmen met at the Führerhaus, in Munich, to redraw the map of Europe. The three visiting statesmen at that historic conference were Prime Minister Neville Chamberlain of Great Britain, Premier Edouard Daladier of France, and Dictator Benito Mussolini of Italy. But by all odds the dominating figure at Munich was the German host, Adolf Hitler.

Führer of the German people, Commander-in-Chief of the German Army, Navy & Air Force, Chancellor of the Third Reich, Herr Hitler reaped on that day at Munich the harvest of an audacious, defiant, ruthless foreign policy he had pursued for five and a half years. He had torn the Treaty of Versailles to shreds. He had rearmed Germany to the teeth— or as close to the teeth as he was able. He had stolen Austria before the eyes of a horrified and apparently impotent world.

All these events were shocking to nations which had defeated Germany on the battlefield only 20 years before, but nothing so terrified the world as the ruthless, methodical, Nazi-directed events which during late summer and early autumn threatened a world war over Czechoslovakia. When without loss of blood he reduced Czechoslovakia to a German puppet state, forced a drastic revision of Europe’s defensive alliances, and won a free hand for himself in Eastern Europe by getting a “hands-off” promise from powerful Britain (and later France), Adolf Hitler without doubt became 1938’s Man of the Year.

Most other world figures of 1938 faded in importance as the year drew to a close. Prime Minister Chamberlain’s “peace with honor” seemed more than ever to have achieved neither. An increasing number of Britons ridiculed his appease-the-dictators policy, believed that nothing save abject surrender could satisfy the dictators’ ambitions.

Among many Frenchmen there rose a feeling that Premier Daladier, by a few strokes of the pen at Munich, had turned France into a second-rate power. Aping Mussolini in his gestures and copying triumphant Hitler’s shouting complex, the once liberal Daladier at year’s end was reduced to using parliamentary tricks to keep his job.

During 1938 Dictator Mussolini was only a decidedly junior partner in the firm of Hitler & Mussolini, Inc. His noisy agitation to get Corsica and Tunis from France was rated as a weak bluff whose immediate objectives were no more than cheaper tolls for Italian ships in the Suez Canal and control of the Djibouti-Addis Ababa railroad.

Gone from the international scene was Eduard Benes, for 20 years Europe’s “Smartest Little Statesman.” Last President of free Czechoslovakia, he was now a sick exile from the country he helped found. Pious Chinese Generalissimo Chiang Kaishek, Man of 1937, was forced to retreat to a “New” West China, where he faced the possibility of becoming only a respectable figurehead in an enveloping Communist movement. If Francisco Franco had won the Spanish Civil War after his great spring drive, he might well have been Man-of-the-Year timber. But victory still eluded the Generalissimo and war weariness and disaffection on the Rightist side made his future precarious.

This entry was posted in media, politics, Uncategorized and tagged Adolf Hitler, Man of the Year, Time Magazine. Bookmark the permalink.