The Reason ’60 Minutes’ Sucks These Days

The Fox ‘News’-ification of CBS news and ’60 Minutes’: The Cleantech Crash 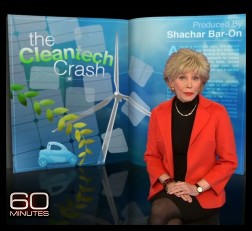 The President of CBS News is David Rhodes. He was hired in February 2011. He was formerly the Vice President of News at Fox “News”.

Again, the current President of CBS News was formerly the VP of News at Fox “News”.

According to his bio posted at CBS: “Rhodes began his career as a Production Assistant at the newly-launched Fox News Channel in 1996, where he later became Vice President of News. At the network he managed coverage of three presidential elections, wars in Afghanistan and Iraq, hurricanes including Katrina, and was the channel’s Assignment Manager on the news desk the morning of September 11, 2001.”

That means, as The Nation’s Greg Mitchell pointed out at the height of the recent CBS News/60 Minutes Benghazi report controversy (before CBS was finally forced toretract the entire fake story), that Rhodes “was the guy who worked hand-in-glove on the biased, often propagandistic, Fox ‘coverage’ of the run-up to the Iraq war, the 2000/2004/2008 elections, the Plame affair, the worst years in Iraq, and all other things Bush and Cheney, and so on.”

Again, the guy who cut his teeth in the news business, beginning as a Production Assistant and working his way up to become VP at Fox “News”, is now the President of CBS News.

That bears both highlighting and repeating as many have been asking, once again, over the past 24 hours, “What’s the Matter with 60 Minutes?” after yet another report last night that is being described as a “hit job” by some and, more charitably, as“puzzling” by others — including by some who were interviewed both on-air and off for the once-great news magazine’s bizarre segment titled “The Cleantech Crash”…

The complete segment, with correspondent Lesley Stahl, is posted at the bottom of this article, so feel free to judge for yourself. But coming on the heels of 60 Minutes’Benghazi hoax debacle last November, a soft-ball, one-sided puff piece on the NSA in December, and a number of other similar missteps, Sunday’s piece on the failures — and largely, only the failures — of the so-called “cleantech revolution” suggests that while it hasn’t yet become Fox “News” proper, the once-venerable news magazine no longer seems to be serving the public interest, but rather…some other interest.

The general premise of this week’s segment was that investment — both public and private — in the cleantech sector since Obama has taken office has been nothing but a disaster. While there have certainly been failures in the sector, it was not noted during the segment, as several critics of Sunday’s piece have pointed out since, that the U.S. Dept. of Energy’s loan program to green startups has a 97% success rate.

“In July 2012, the former head of the loan guarantee program testified to Congress that funds that went to bankrupt companies represented less than 3 percent of the total Department of Energy portfolio,” Media Matters’ Shauna Theel notes. “In other words, the program so far has a 97-percent success rate, far better than that of venture capitalists.”

“Clean technology is booming by every key indicator,” Climate Progress’ Joe Romm said in opening his piece lambasting the 60 Minutes report just after it aired, “but you would never know that from Sunday’s absurd 60 Minutes piece touting an imaginary ‘Cleantech Crash.'”

He also notes the 97% success rate cited for the DOE Loan Guarantee Program, “while the companies CBS focuses on such as Solyndra and Abound Solar were just 3 percent of the portfolio.”

“The piece was puzzling for several reasons,” Dana Hull, clean tech and energy policy reporter for the San Jose Mercury News’ writes, citing the fact that [emphasis hers] “there was absolutely no mention of climate change. None. That’s the whole point of cleantech, after all: using the promise of technology and innovation to try to wean our economy off of fossil fuels.”

POSTSCRIPT: On January 6, 2019, Susan Zirinsky was named President of CBS News, replacing David Rhodes.[2][3] Rhodes will be leaving on March 1, 2019, “after overseeing Zirinsky’s transition and have an advisory role after that.”