Truth: A Casualty of War

1. President Obama’s opening lines at the U.N. on Tuesday looked down on people who would think to settle disputes with war. Obama was disingenuously avoiding the fact that earlier this month he sought to drop missiles into a country to “send a message” but was blocked by the U.S. Congress, the U.N., the nations of the world, and popular opposition — after which Obama arrived at diplomacy as a last resort.

2. “It took the awful carnage of two world wars to shift our thinking.” Actually, it took one. The second resulted in a half-step backwards in “our thinking.” The Kellogg-Briand Pact banned all war. The U.N. Charter re-legalized wars purporting to be either defensive or U.N.-authorized.

3. “[P]eople are being lifted out of poverty,” Obama said, crediting actions by himself and others in response to the economic crash of five years ago. But downward global trends in poverty are steady and long pre-date Obama’s entry into politics. And such a trend does not exist in the U.S. [1]

4. “Together, we have also worked to end a decade of war,” Obama said. In reality, Obama pushed Iraq hard to allow that occupation to continue, and was rejected just as Congress rejected his missiles-for-Syria proposal. Obama expanded the war on Afghanistan. Obama expanded, after essentially creating, drone wars. Obama has increased global U.S. troop presence, global U.S. weapons sales, and the size of the world’s largest military. He’s put “special” forces into many countries, waged a war on Libya, and pushed for an attack on Syria. How does all of this “end a decade of war”? And how did his predecessor get a decade in office anyway?

5. “Next year, an international coalition will end its war in Afghanistan, having achieved its mission of dismantling the core of al Qaeda that attacked us on 9/11.” In reality, Bruce Riedel, who coordinated a review of Afghanistan policy for President Obama said, “The pressure we’ve put on [jihadist forces] in the past year has also drawn them together, meaning that the network of alliances is growing stronger not weaker.” (New York Times, May 9, 2010.)

7. “… so they target only those who pose a continuing, imminent threat to the United States where capture is not feasible.” On June 7, 2013, Yemeni tribal leader Saleh Bin Fareed toldDemocracy Now that Anwar al Awlaki could have been turned over and put on trial, but “they never asked us.” In numerous other cases it is evident that drone strike victims could have been arrested if that avenue had ever been attempted. A memorable example was the November 2011 drone killing in Pakistan of 16-year-old Tariq Aziz, days after he’d attended an anti-drone meeting in the capital, where he might easily have been arrested — had he been charged with some crime. This weeks drone victims, like all the others, had never been indicted or their arrest sought.

8. “… and there is a near certainty of no civilian casualties.” There are hundreds of confirmed [2] civilian dead from U.S. drones, something the Obama administration seems inclined to [3] keep as quiet as possible.

10. “[In Syria, P]eaceful protests against an authoritarian regime were met with repression and slaughter. … America and others have worked to bolster the moderate opposition.” In fact, the United States has armed a violent opposition intent on waging war and heavily influenced if not dominated by foreign fighters and fanatics. 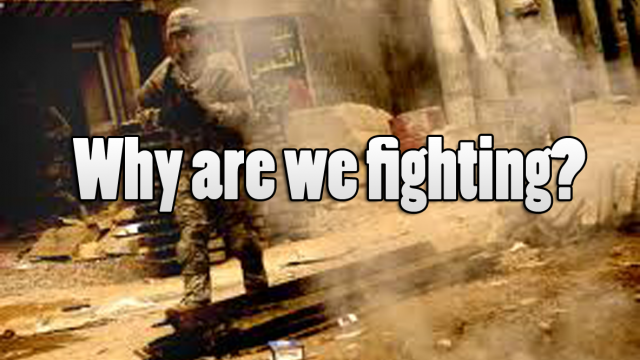 11. “[T]he regime used chemical weapons in an attack that killed more than 1,000 people, including hundreds of children.” Maybe, but where’s the evidence? Even Colin Powell brought (faked) evidence.

12. “How should we respond to conflicts in the Middle East?” This suggests that the United States isn’t causing conflicts in the Middle East or aggravating them prior to altering its position and “responding.” In fact, arming and supporting brutal governments in Bahrain, Egypt, Yemen, Jordan, Israel, etc., is behavior that could do a great deal of good simply by ceasing.

13. “How do we address the choice of standing callously by while children are subjected to nerve gas, or embroiling ourselves in someone else’s civil war?” That isn’t a complete list of choices, as Obama discovered when Russia called Kerry’s bluff and diplomacy became a choice, just as disarmament and de-escalation and pressure for a ceasefire are choices. Telling Saudi Arabia “Stop arming the war in Syria or no more cluster bombs for you,” is a choice.

15. “[T]he international community must enforce the ban on chemical weapons.” Except against Israel or the United States.

16. “… and Iranians poisoned in the many tens of thousands.” This was good of Obama to recognize Iran’s suffering, but it would have been better of him to recall where Iraq acquired some of its weapons of mass destruction.

17. “It is an insult to human reason — and to the legitimacy of this institution — to suggest that anyone other than the regime carried out this attack.” Really? In the absence of evidence, skepticism isn’t reasonable for this Colin-Powelled institution, the same U.N. that was told Libya would be a rescue and watched it become a war aimed at illegally overthrowing a government? Trust us?

19. “I do not believe that military action — by those within Syria, or by external powers — can achieve a lasting peace.” Yet, the U.S. government is shipping weapons into that action.

20. “Nor do I believe that America or any nation should determine who will lead Syria … Nevertheless, a leader who slaughtered his citizens and gassed children to death cannot regain the legitimacy to lead a badly fractured country.” The Syrians should decide their own fate as long as they decide it the way I tell them to.

21. “[N]or does America have any interest in Syria beyond the well-being of its people, the stability of its neighbors, the elimination of chemical weapons, and ensuring it does not become a safe-haven for terrorists.” That’s funny. Elsewhere, you’ve said [4] that weakening Syria would weaken Iran.

23. “We will ensure the free flow of energy from the region to the world. Although America is steadily reducing our own dependence on imported oil…” That first remarkably honest sentence is only honest if you don’t think about what “free flow” means. The second sentence points to a real, if slow, trend but obscures the fact that only 40% [5] of the oil the U.S. uses comes from the U.S., which doesn’t count much of the oil the U.S. military uses while “ensuring the free flow.” Nor is switching to small domestic supplies a long-term solution as switching to sustainable energy would be.