It’s not just his giant income or the low tax rates he pays on it. And it’s not just the videotape of him berating almost half of America, or his endless gaffes, or his regressive budget policies.

It’s something that unites all of this, and connects it to the biggest underlying problem America faces — the unprecedented concentration of wealth and power at the very top that’s undermining our economy and destroying our democracy. 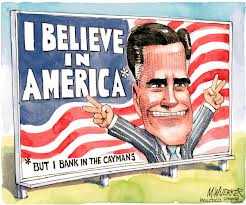 But here’s the difference. These men were champions of the working class and the poor, and were considered traitors to their own class. Teddy Roosevelt railed against the “malefactors of great wealth,” and he busted up the oil and railroad trusts.

FDR thundered against the “economic royalists,” raised taxes on the wealthy, and gave average working people the right to form unions — along with Social Security, unemployment insurance, a minimum wage, and a 40-hour workweek.

But Mitt Romney is not a traitor to his class. He is a sponsor of his class. He wants to cut their taxes by $3.7 trillion over the next decade, and hasn’t even specified what “loopholes” he’d close to make up for this gigantic giveaway.

And he wants to cut benefits that almost everyone else relies on — Medicare, Medicaid, Social Security, food stamps, unemployment insurance, and housing assistance.

He’s even a warrior for his class, telling his wealthy followers his job isn’t to worry about the “47 percent” of Americans who won’t vote for him, whom he calls “victims” and he berates for not paying federal incomes taxes and taking federal handouts.

(He mangles these facts, of course. Almost all working Americans pay federal taxes — and the federal taxes that have been rising fastest for most people are Social Security payroll taxes, which aren’t collected on a penny of income over $110,100. Moreover, most of the “47 percent” whom he accuses of taking handouts are on Medicare or Social Security — the biggest “entitlement” programs — which, not incidentally, they paid into during their working lives.)

Money means power. Concentrated wealth at the top means extraordinary power at the top. The reason Romney pays a rate of only 14 percent on $13 million of income in 2011 — a lower rate than many in the middle class — is because he exploits a loophole that allows private equity managers to treat their income as capital gains, taxed at only 15 percent.

And that loophole exists solely because private equity and hedge fund managers have so much political clout — as a result of their huge fortunes and the money they’ve donated to political candidates — that neither party will remove it.

In other words, everything America is learning about Mitt Romney — his tax returns, his years at Bain Capital, the video of his speech to high-end donors in which he belittles half of America, his gaffes, the budget policies he promotes — repeat and reenforce the same underlying reality.

So much wealth and power have accumulated at the top of America that our economy and our democracy are seriously threatened. Romney not only represents this problem. He is the living embodiment of it.