10 Questions For The Republican Party 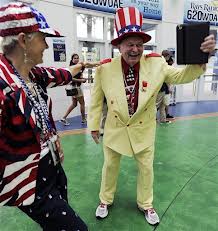 As you put on your National Republican Convention , there are things in your platform that don’t quite make sense to me.  So can you please help me understand your platform by answering these 10 simple questions below?

1.  When you say that lowering taxes for the rich will create more jobs, why don’t you simply propose that the top 1% pay no taxes whatsoever? Or better yet, give them more subsidies, and tax the rest of us more to make up the difference?  According to your economic theory, that’s guaranteed to generate some stratosphere-high level of job creation.

2. Speaking of the 1%, whom you praise as “job creators,” you have told us how hard they work to create jobs.  However, the job growth had been less than stellar in the past decade despite all their valiant job-creating efforts, so does that make the rest of us “job destroyers”?

3. When Republican senators blasted the proposed Buffett rule that required a 30% minimum tax because it would not significantly reduce the deficit, does that mean we can count on their support if that rule is changed to a minimum 90% tax rate, which would  make an even larger impact on the deficit?

4. I know you fight against the minimum wage because it raises American labor costs and hurts our competitiveness across the globe.  Obviously, if Americans are paid nothing for their work, no country could beat this labor cost.  So why don’t you just propose to bring back slavery?

6. You say that doctors and physicians should be able to make decisions based on what their conscience says and not on the client’s best interest.   Should bank tellers be allowed to follow their conscience when they notice a bank customer with millions in his account and know another customer struggling to buy food?

7. You always remind us that GOP’s stand against abortion, contraception, and equal pay is not a “War on Women.”  Since most of the party positions in those issues are rooted in the religious beliefs of the party members, would “Jihad on Women” be a more appropriate name?

8. When you push laws to ban abortion even in the case of rape, do you value the right of the rapist to procreate more than the right of rape victim not to?

9. I know you oppose abortion because you consider every life sacred, but if you are okay with capital punishment, killing Muslim terrorists, Stand Your Ground laws, and letting people who they can’t buy health insurance die, do you actually mean that a person’s life is sacred only until the person is born?

10. I have noticed that every Republican presidential candidate who ever said that God wanted him (or her) to be President has dropped out of this campaign?  Is political endorsement from God that toxic?  Or is it because God is incompetent in picking a winning candidate, or have those candidates been, ummm, lying to us?