THE V.P. PICK: WHAT WAS ROMNEY THINKING?

Why did the Romney campaign choose a bland 7-term congressman from Wisconsin as his running mate? Robert Reich examines conservative ideologue Paul Ryan, why Mitt Romney felt him to be his best choice, and why Ryan’s social Darwinist philosophy appeals to the presumptive Republican nominee. I ‘d like to add one additional rationale to the mix: the V.P. pick will ensure additional big money campaign donations from Romney’s billionaire buddies, who appreciate Ryan’s tax plans. — BPR Editor 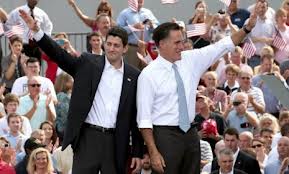 Ryan is not a firebrand. He’s not smarmy. He doesn’t ooze contempt for opponents or ridicule those who disagree with him. In style and tone, he doesn’t even sound like an ideologue – until you listen to what he has to say.

It’s here — in Ryan’s views and policy judgments — we find the true ideologue. More than any other politician today, Paul Ryan exemplifies the social Darwinism at the core of today’s Republican Party: Reward the rich, penalize the poor, let everyone else fend for themselves. Dog eat dog.

Ryan’s views are crystallized in the budget he produced for House Republicans last March as chairman of the House Budget committee. That budget would cut $3.3 trillion from low-income programs over the next decade. The biggest cuts would be in Medicaid, which provides healthcare for the nation’s poor – forcing states to drop coverage for an estimated 14 million to 28 million low-income people, according to the non-partisan Center for Budget and Policy Priorities.

Ryan’s budget would also reduce food stamps for poor families by 17 percent ($135 billion) over the decade, leading to a significant increase in hunger – particularly among children. It would also reduce housing assistance, job training, and Pell grants for college tuition.

In all, 62 percent of the budget cuts proposed by Ryan would come from low-income programs.

The Ryan plan would also turn Medicare into vouchers whose value won’t possibly keep up with rising health-care costs – thereby shifting those costs on to seniors.

At the same time, Ryan would provide a substantial tax cut to the very rich – who are already taking home an almost unprecedented share of the nation’s total income. Today’s 400 richest Americans have more wealth than the bottom 150 million of us put together. 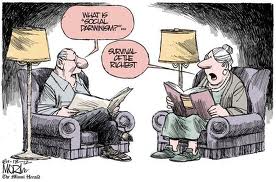 Ryan’s views are pure social Darwinism. As William Graham Sumner, the progenitor of social Darwinism in America, put it in the 1880s: “Civilization has a simple choice.” It’s either “liberty, inequality, survival of the fittest” or “not-liberty, equality, survival of the unfittest. The former carries society forward and favors all its best members; the latter carries society downwards and favors all its worst members.”

Is this Mitt Romney’s view as well?

Some believe Romney chose Ryan solely in order to drum up enthusiasm on the right. Since most Americans have already made up their minds about whom they’ll vote for, and the polls show Americans highly polarized – with an almost equal number supporting Romney as Obama — the winner will be determined by how many on either side take the trouble to vote. So in picking Ryan, Romney is motivating his rightwing base to get to the polls, and pull everyone else they can along with them.

But there’s reason to believe Romney also agrees with Ryan’s social Darwinism. Romney accuses President Obama of creating an “entitlement society” and thinks government shouldn’t help distressed homeowners but instead let the market “hit the bottom.” And although Romney has carefully avoided specifics in his own economic plan, he has said he’s “very supportive” of Ryan’s budget plan. “It’s a bold and exciting effort, an excellent piece of work, very much needed … very consistent with what I put out earlier.”

Romney hasn’t put out much but the budget he’s proposed would, according to the Center on Budget and Policy Priorities, throw ten million low-income people off the benefits rolls for food stamps or cut benefits by thousands of dollars a year, or both.

At the same time, Romney wants to permanently extend the Bush tax cuts to the wealthy, reduce corporate income taxes, and eliminate the estate tax. These tax reductions would increase the incomes of people earning more than $1 million a year by an average of $295,874 annually, according to the non-partisan Tax Policy Center.

Social Darwinism offered a moral justification for the wild inequities and social cruelties of the late nineteenth century. It allowed John D. Rockefeller, for example, to claim the fortune he accumulated through his giant Standard Oil Trust was “merely a survival of the fittest… the working out of a law of nature and of God.”

The social Darwinism of that era also undermined all efforts to build a more broadly based prosperity and rescue our democracy from the tight grip of a very few at the top. It was used by the privileged and powerful to convince everyone else that government shouldn’t do much of anything.

Not until the twentieth century did America reject social Darwinism. We created a large middle class that became the engine of our economy and our democracy. We built safety nets to catch Americans who fell downward, often through no fault of their own.

We designed regulations to protect against the inevitable excesses of free-market greed. We taxed the rich and invested in public goods – public schools, public universities, public transportation, public parks, public health – that made us all better off.

In short, we rejected the notion that each of us is on our own in a competitive contest for survival.

But choosing Ryan, Romney has raised for the nation the starkest of choices: Do we want to return to that earlier time, or are we willing and able to move forward — toward a democracy and an economy that works for us all?

3 Responses to THE V.P. PICK: WHAT WAS ROMNEY THINKING?