In just one more of numerous examples, the U.S. Senate vote Monday on the so-called “Buffett Rule” provided more evidence of the dysfunctional mess that is supposed to be our democratic political system.

By a 51-45 vote, the Senate voted in favor of a minimum tax rate for millionaires and billionaires. Polls clearly show the public agrees that the very wealthy should pay an equal or higher income tax rate than other taxpayers. 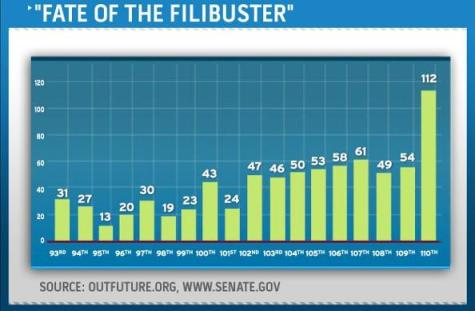 But of course the legislation didn’t pass because, after all, we are talking about the U.S. Senate, where 60 votes are required to invoke cloture, end a filibuster and pass most bills. With partisanship and obstructionism the  GOP’s preferred strategy, filibuster threats  have soared to record levels and explain in large part why so many popular Democratic Party proposals have been left in the dust.

What makes this all the more absurd is that the U.S. Constitution has a solution for a deadlocked Senate. Article I, Section 3, Clause 4 spells it out: “The Vice President of the United States shall be President of the Senate, but shall have no vote, unless they be equally divided.”

Exactly how this constitutionally mandated role can be implemented these days, when 60 Senate votes are needed to get legislation passed, is hard to figure out. Even if the Monday vote  had been 50-50, with Joe Biden sitting in the bullpen, the “Buffett Rule” never had a prayer of passing.

This kind of deadlock by minority rule has worked out wonderfully for the GOP.  With their stated goal, “for President Obama to be a one-term President” according to Senate Republican leader Mitch McConnell, gridlock is easy and effective. 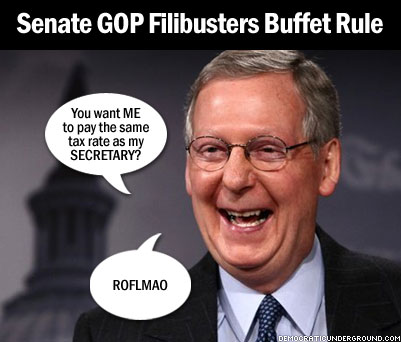 (ROFLMAO translation=rolling on floor laughing my ass off)

So once again, millionaires will continue paying lower effective tax rates, single-payer or public option in health care will be out of reach, and federal judges will fail to be confirmed. Is it possible Democrats will get tough and move to reform the rules to prevent such blatant obstruction by Republicans?  It’s about as likely as the GOP admitting they were wrong about global warming and abortion rights.

Expect a whole lot more good legislation to die in the United States Senate this year.

ALSO PUBLISHED IN OPEDNEWS.COM and OKIEPROGRESSIVE 04/18/2012

4 Responses to Senate Stuck in Quicksand of Record Filibusters