How to Reform Corporate America

The Necessity and Possibility of Corporate Reform: Part 2. Reform Strategies

Moving a mountain might be easier than moving government back to democracy and away from a corpocracy that has put government in the back seat and corporateAmerica in the driver’s seat. Corporate reform, with the exception of trying to reform the merchants of death (discussed at the end of this article), in contrast to government reform, may just be an easier way to slow America’s sliding into a state of ruiNation. The introductory article ended by suggesting steps watchdog groups could take in searching for the “scoundrels and saints” among corporateAmerica and its many allies.Watchdogs that only watch are nothing more than lapdogs. We Americans ought to have had enough of an over fed lazy fed lapdog that lets corporate America exploit and harm us.   Just as obviously, no more effective than lapdogs are proposals that stay stuck to paper. This final article I hope is on “Teflon.”Are there any instigators of corporate reform?A few basically isolated and relatively impotent NGOs. At the considerable risk of some omissions and commissions I poured through my list of 100 some NGOs and found a few that were actually confronting corporations and industries in various ways such as sending petitions to corporations to cease particular kinds of wrongdoing; holding protests at corporations’ headquarters (some ending in arrests); warning consumers of instances of corporate fraud; lock downs at banks; blockades of shipments; organizing actions to stop corporations’ selling of unhealthy products; and exposing the most harmful corporations to a “Hall of Shame.” 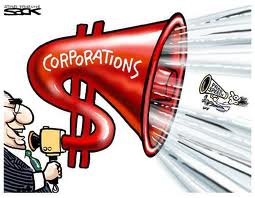 A few NGOs in supporting roles. As I was going through my bigger list I spotted some NGOs that are carrying out supporting roles like public education, activist skill training, helping to build grassroots movements, helping to organize oppositions to corporations, and helping to expand small and local business alternatives. Here are some of these groups:

A few scattered, disconnected and impotent movements. There are so many grassroots movements in America that a person cataloguing them once pleaded for help in recording the new ones sprouting. They usually start out and stay small-scale, limited to specific “back yard” issues that concern local communities or regions. The movement getting the most publicity today seems to be OWS and its offshoots that I lump together into Occupy America. As far as I can tell it’s still an inward, process-oriented movement (for a cogent critique of it, see the article in the March 21, 2012 issue of OpEdNews.com by Danny Schechter author of the new book “Occupy: Dissecting Occupy Wall Street” with hands-on experience in civil rights and community organizing.

Who ought to start instigating?

This is a pivotal question. If NGOs and various and sundry movements could be caught in a moment of unguarded candor I think they would admit that their impact on either government reforms and/or corporate reforms has been essentially negligible. Government is as corrupt as ever. Corrupt industries and their corporations are still as corrupt as ever. Here is my list of answers:

A large cadre of NGO strike forces. They don’t exist yet, just like my proposed U.S. Chamber of Democracy doesn’t exist yet. While I haven’t given up on the prospect of the latter, I am going to modify my overtures to the many remaining NGOs yet to be contacted and suggest to them either supporting an umbrella network like a USCD or a scaled-down alternative of dividing up the industries and their corporations and for each creating a cadre of NGO strike forces.

The Democracy Coalition. It doesn’t exist yet either. In my website,www.uschamberofdemocracy.com I identified 27 segments of the populace that have or should have grievances against the corpocracy. Most of them have yet to coalesce into their own movements but a few have. Labor, for example, is one of them, yet it remains to be seen just how far the unions reach out to other groups. I have gotten no replies to my overtures to the heads of the major unions.

You. Readers of OpEdNews.com ought to become instigators. You may already be one. If you are, can you do more? John Perkins ended his article on the vicious circle of military aggression in the March 21, 2012 issue of OpEdNews.com by exhorting readers to “Take at least one action for peace every single day.” I wrote him immediately that he should do more given his visibility (I had written in 2006 a published review of his book “Confessions of an economic hit man” that had given him instant publicity).

You could champion the idea of the USCD and The Democracy Coalition. You could write particular NGOs and tell them to be less dependent for their existence on the continued existence of the corpocracy. If you donate money to any of them tell them you are not getting your money’s worth. And as you read the rest of this article think of additional ways you could get more involved.

The scoundrels themselves? Don’t laugh. It’s not out of the question. I will return to it shortly.

How not to start instigating: Three stories of mice at the table with hungry cats  (Continued)

Gary Brumback, Ph. D, wrote The Devil’s Marriage: Break Up the Corpocracy or Leave Democracy in the Lurch. His website is uschamberofdemocracy.com

1 Response to How to Reform Corporate America