The American Military Empire and Global Police State continues its expansion. Glenn Greenwald reports on a Washington Post article detailing how President Obama “has assembled such a highly efficient machine for the targeted killing of suspected terrorists.” Of course, this freestyle killing is done in officially mandated secrecy and with scarcely a whisper of concern from the corporate media or politicians of either party. –Arlen 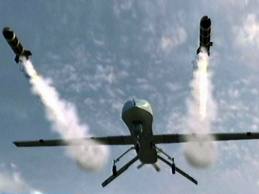 I intended to post sporadically or not at all this week, and that’s still my plan, but there is a new Washington Post article which contains three short passages that I really want to highlight because they so vividly capture the essence of so much. The article, by Greg Miller, is being promoted by the Post this way: “In 3 years, the Obama administration has built a vast drone/killing operation”; it describes the complete secrecy behind which this is all being carried out and notes: “no president has ever relied so extensively on the secret killing of individuals to advance the nation’s security goals.” Here is the first beautifully revealing passage:

Senior Democrats barely blink at the idea that a president from their party has assembled such a highly efficient machine for the targeted killing of suspected terrorists. It is a measure of the extent to which the drone campaign has become an awkward open secret in Washington that even those inclined to express misgivings can only allude to a program that, officially, they are not allowed to discuss.

In sum: the President can kill whomever he wants anywhere in the world (including U.S. citizens) without a shred of check or oversight, and has massively escalated these killings since taking office (at the time of Obama’s inauguration, the U.S. used drone attacks in only one country (Pakistan); under Obama, these attacks have occurred in at least six Muslim countries). Because it’s a Democrat (rather than big, bad George W. Bush) doing this, virtually no members of that Party utter a peep of objection (a few are willing to express only the most tepid, abstract “concerns” about the possibility of future abuse). And even though these systematic, covert killings are widely known and discussed in newspapers all over the world — particularly in the places where they continue to extinguish the lives of innocent people by the dozens, including children — Obama designates even the existence of the program a secret, which means our democratic representatives and all of official Washington are barred by the force of law from commenting on it or even acknowledging that a CIA drone program exists (a prohibition enforced by an administration that has prosecuted leaks it dislikes more harshly than any other prior administration). Then we have this:

Another reason for the lack of extensive debate is secrecy. The White House has refused to divulge details about the structure of the drone program or, with rare exceptions, who has been killed. White House and CIA officials declined to speak for attribution for this article.

Inside the White House, according to officials who would discuss the drone program only on the condition of anonymity, the drone is seen as a critical tool whose evolution was accelerating even before Obama was elected.

The Most Transparent Administration Ever™ not only prevents public debate by shrouding the entire program in secrecy — including who they’re killing and why, and even including their claimed legal basis for these killings (what Democratic lawyers decried during the Bush years as the tyranny of “secret law”) — but they then dispatch their own officials to defend what they’re doing solely under the cover of anonymity so there is no accountability. And, of course, the Post (in an otherwise good though imperfect article) dutifully allows them to do this. In other words: if you ask us about our systematic killing operation, we’ll refuse to answer or even acknowledge it exists and we will legally bar critics from talking about it in public; nobody in government can comment on any of this except us, which we’ll do only by issuing anonymous decrees declaring it Good and Right. Finally, we have this: