“Killing People Without Knowing Who They Are” 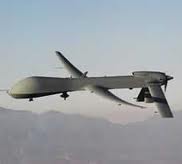 In a New York Times Op-Ed yesterday, international human rights lawyer Clive Stafford Smith describes a meeting he had in Pakistan with residents from the Afghan-Pakistani border region that has been relentlessly bombed by American drones; if I had one political wish this week, it would be that everyone who supports (or acquiesces to) President Obama’s wildly accelerated drone attacks would read this:

The meeting had been organized so that Pashtun tribal elders who lived along the Pakistani-Afghan frontier could meet with Westerners for the first time to offer their perspectives on the shadowy drone war being waged by the Central Intelligence Agency in their region. Twenty men came to air their views; some brought their young sons along to experience this rare interaction with Americans. In all, 60 villagers made the journey. . . .

On the night before the meeting, we had a dinner, to break the ice. During the meal, I met a boy named Tariq Aziz. He was 16. As we ate, the stern, bearded faces all around me slowly melted into smiles. Tariq smiled much sooner; he was too young to boast much facial hair, and too young to have learned to hate.

The next day, the jirga lasted several hours. I had a translator, but the gist of each man’s speech was clear. American drones would circle their homes all day before unleashing Hellfire missiles, often in the dark hours between midnight and dawn. Death lurked everywhere around them. . . .

On Monday, [Tariq] was killed by a C.I.A. drone strike, along with his 12-year-old cousin, Waheed Khan. The two of them had been dispatched, with Tariq driving, to pick up their aunt and bring her home to the village of Norak, when their short lives were ended by a Hellfire missile.

My mistake had been to see the drone war in Waziristan in terms of abstract legal theory — as a blatantly illegal invasion of Pakistan’s sovereignty, akin to President Richard M. Nixon’s bombing of Cambodia in 1970.

But now, the issue has suddenly become very real and personal.Tariq was a good kid, and courageous. My warm hand recently touched his in friendship; yet, within three days, his would be cold in death, the rigor mortis inflicted by my government.

And Tariq’s extended family, so recently hoping to be our allies for peace, has now been ripped apart by an American missile — most likely making any effort we make at reconciliation futile.

This tragedy repeats itself over and over. After I linked to this Op-Ed yesterday on Twitter — by writing that “every American who cheers for drone strikes should confront the victims of their aggression” — I was predictably deluged with responses justifying Obama’s drone attacks on the ground that they are necessary to kill The Terrorists. Reading the responses, I could clearly discern the mentality driving them: I have never heard of 99% of the people my government kills with drones, nor have I ever seen any evidence about them, but I am sure they are Terrorists.That is the drone mentality in both senses of the word; it’s that combination of pure ignorance and blind faith in government authorities that you will inevitably hear from anyone defending President Obama’s militarism. As Jonathan Schwarz observed after the U.S. unveiled the dastardly Iranian plot to hire a failed used car salesman to kill America’s close friend, the Saudi Ambassador: “I’d bet the Saudi ambassador to the U.S. has closer ‘ties’ to Al Qaeda than 90% of the people we’ve killed with drones.”

As it turns out, it isn’t only the President’s drone-cheering supporters who have no idea who is being killed by the program they support; neither does the CIA itself. A Wall Street Journal article yesterday described internal dissension in the administration to Obama’s broad standards for when drone strikes are permitted, and noted that the “bulk” of the drone attacks — the bulk of them – “target groups of men believed to be militants associated with terrorist groups, but whose identities aren’t always known.” As Spencer Ackerman put it: “The CIA is now killing people without knowing who they are, on suspicion of association with terrorist groups”; moreover, the administration refuses to describe what it even means by being “associated” with a Terrorist group (indeed, it steadfastly refuses to tell citizens anything about the legal principles governing its covert drone wars).

Click here to read the entire article: The Drone Mentality