The War (and Film) You Won’t See

Banned in the US: the Film You Won’t See 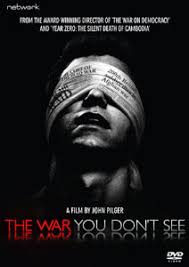 Americans now have the opportunity of seeing John Pilger’s critically acclaimed The War You Don’t See as a free download at http://topdocumentaryfilms.com/war-you-dont-see/ The groundbreaking documentary was effectively banned in the US when Patrick Lannan, who funds the “liberal” Lannon Foundation, canceled the American premier (and all Pilger’s public appearances) in June 2010. Pilger provides the full background of this blatant act of censorship at his website http://www.johnpilger.com. After seeing the film, I believe its strong support of Julian Assange (who the US Department of Justice is attempting to prosecute) is the most likely reason it’s not being shown in American theatres.

Pilger’s documentary centers around the clear propaganda role both the British and US press played in cheerleading the US/British invasion of Afghanistan and Iraq. It includes a series of interviews in which Pilger confronts British and American journalists (including Dan Rather) and news executives regarding their failure to give air time to weapons inspectors and military/intelligence analysts who were publicly challenging the justification for these invasions. The Australian filmmaker focuses heavily on the fabricated evidence (Saddam Hussein’s non-existent weapons of mass destruction and links to 9-11) that was used to convince American and British lawmakers to go along with an illegal attack on a defenceless nation (Iraq).

Pilger also confronts the British news executives (from the BBC and ITV) for reporting — unchallenged — Israeli propagandist Mark Regev regarding the May 2010 Israeli attack (in international waters) of the international peace flotilla and murder of nine Turkish peace activists (including six who were executed in the back of the head at point blank range).

Although none of the news makers offer a satisfactory explanation for their actions, British news executives show obvious embarrassment when Pilger forces them to admit they knew about opposing views and failed to offer them equal air time. In my view, the main value of the film is reminding us how essential it is to hold journalists to account for their lack of objectivity. Too many activists (myself included) have allowed ourselves to become too cynical about the mainstream media to hold individual reporters and their editors and managers accountable when they function as government propagandists instead of journalists.

The War You Don’t See was released in Britain in December 2010, in the context of a Parliamentary investigation into the Blair government’s use of manufactured intelligence to ensnare the UK into a disastrous ten year foreign war. Government/corporate censorship is far more efficient in the US, and the odds of a similar Congressional investigation occurring in the US seem extremely low…

1 Response to The War (and Film) You Won’t See