Significant trends point to a Republican Party  sweep of the 2012 elections, bringing with it the most right-wing government in American history. Just as Scott Brown’s upset win in the January 2010 Massachusetts Senate special election foretold the decisive GOP gains in the 2010 election later in the year, Republican Bob Turner’s convincing win in the heavily blue 9th Congressional District in New York may be a predictor of looming disaster next year for the struggling and demoralized Democratic Party.

While we can’t extrapolate from one clearly atypical Congressional district, the major trends that began in the 2010 election remain in place and signal continuing Republican electoral momentum across the nation. The GOP already controls the House, Democrats cling to a narrow majority in the Senate (but need to defend 23 of the 33 Senate races in play), and President Obama will have to run for re-election against the backdrop of a weak economy.

1) MONEY. It was more than coincidence that the pivotal and anti-democratic Citizens United Supreme Court decision in 2010 was followed by a huge Republican mid-term election victory. Because the Court ruled that corporations and other wealthy interests could contribute unlimited amounts of campaign spending, the deep-pocket GOP donors were able to pour money wherever needed in elections all over the country. While money may not have been the decisive factor in every race, the breadth of the conservative tide was wider than would ordinarily be expected.

Already, in anticipation of the 2012 election, multi-million dollar campaign contributions by conservative-oriented Super PACS, fueled with money from the billionaire Koch brothers and other wealthy donors, have soared to record levels. Democratic candidates, relying on contributions from their less affluent business allies and weakened labor unions, are at a huge disadvantage against this onslaught of corporate pro-GOP fundraising.

2) MEDIA.  With Fox News and nationwide conservative talk radio, Republicans have a built-in media advantage. In addition, the mainstream media, owned by a handful of giant corporations, are presenting the lies and crazy talk of Republican/Tea Party candidates as  respectable viewpoints, even if a decade or two earlier these ideologues would have been marginalized as nut cases. That one of the two major parties in this country has been largely taken over by extremists, is ignored by the media.  The major networks and most cable news channels desire balance and competition, and thus tend to treat the outright lies, unsubstantiated opinions, and bizarre talking points of the Tea Party candidates as serious points of view.

3) ENTHUSIASM. The passion of Republicans and the apathy of Democrats will likely affect turnout in the 2012 election campaign. Conservatives will be, as they usually are, pumped up into a determined fervor by the right-wing media, and many typically see elections as biennial crusades against liberals. terrorists, homosexuals, godless heathens, illegal immigrants and “the others” who endanger traditional American values.

On the other side is a leaderless and feckless Democratic Party.  President Obama is supposed to be the head of the party, but appears to reject that role, instead positioning himself as a moderate appealing to all Americans in order to win re-election.  The President rarely names Republicans as the enemies of progress or points out the contrast between his and Republican policies, preferring instead to mildly scold the generic “Congress” for their ideas and inaction.

Nobody else is presented as a strong advocate of the Democratic Party, not in the way that GOP congressional leaders and their presidential candidates are.  If Democrats do speak up, the media is less interested, with their mindset being that President Obama is the party’s spokesman.

Many Democrats didn’t bother to vote in 2010, and will likely be just as unmotivated for next year’s election To make matters worse, by not fulfilling his promises of “hope and change” that fired up his base during the 2008 election, and by not standing strong for progressive principles, President Obama has left Democrats feeling dispirited and frustrated. 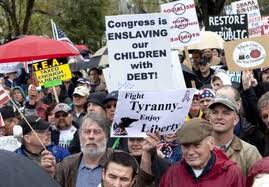 There are well over thirteen months left until the 2012 election. Should Democrats already be in panic mode?  They better be. Unless the president and other party leaders pursue a major offensive and agressively challenge Republican and Tea Party ideas,  Democrats will likely be swept out of office. Unless they figure out a way to neutralize the money factor and change the media landscape, their long-term prospects also look bleak.

The forces and trends against the Democratic Party are many and powerful, and Barack Obama has not demonstrated the kind of leadership necessary to overcome them nor the fighting spirit necessary to energize the party’s faithful. Barring a major shift in President Obama’s strategy and presentation, 2012 looks to be a dismal year for Democrats, and ultimately, our troubled nation.