How the World Will End

Humanity Is Riding Delusion to Extinction

Horses sporting gas masks. That, of all things, has been on my mind lately. Bear with me, now. Gaze at the ever-so-cockamamie photo. A horse, wearing a gas mask. Nothing so illustrates the rank absurdity and irrationality of the human condition. It was during World War I—which killed an unheard-of nine million soldiers in just four years—that the armies of Europe still employed horses in an age of machine guns, airplanes (eventually), tanks and poison gas attacks. Rather than call a halt to the inane slaughter in the trenches, the world’s great powers fought that wildly nationalistic war to its macabre conclusion. One result was horses in gas masks. That was only a hundred years ago.

As the U.S. government, as well as far too many Americans, remain fixated on the decidedly minor threat of Islamist “terrorism,” two actual global existential perils persist and are hardly addressed. I’m speaking, of course, of nuclear war and man-made, climate-based catastrophe. Hardly any serious establishment political figure in this country has taken meaningful action on such grave matters, mind you—busy as they are either reflexively attacking or defending Trump’s comparably trivial policies in Ukraine or Syria. Who noticed as the Bulletin of Atomic Scientists ticked the Doomsday Clock a stroke closer to midnight? Who has commented on the absurd reality that one of the two major American political parties denies the very existence of climate change, while the (hardly progressive) Pentagon repeatedly warns of its reality and profound consequences?

Which brings me back to the irrational slaughter of the First World War: its philosophical meaning, consequences, and what it, and a few subsequent events, portends for the fate of humanity. Were the generals of the era simply dumb for sending waves of infantrymen into the teeth of machine-gun fire, or did they face the old “wheel problem?” It took human beings at least tens of thousands of years to even conceive of the wheel. Seen in this context, the three or so years it took the generals to develop a combined-arms (tanks + radios + artillery + small unit infantry maneuver) “solution” to break the stalemate doesn’t seem quite so awful. Not that many, if not most, senior commanders couldn’t be at times, and especially early on, obtuse, arrogant and callous.

They and their civilian political masters ought to have recognized, when around a million soldiers died in the first five months of war, that as of Dec. 31, 1914, nationalism was obsolete. Fighting for one’s “country,” the romance of national power, was essentially—with the advent of efficient machine guns and poison gas—a suicide pact among each country’s young men. Yet on the war raged, and soon enough, an even bloodier Second World War broke out. This happened despite the widespread global antiwar sentiment in the wake of the first war. Few major governments were responsive, and despite the profound hopes among WWII veterans that theirs would be the last, war has continued almost endlessly into our new century.

The Second World War began with its own horse-gas-mask, technology-ahead-of-tactics sort of absurdity, when, in September 1939, Polish cavalrymen (to some degree apocryphally) faced off with German tanks. But the real, philosophical, lesson of that war’s culmination was this: If World War I should’ve made nationalism obsolete, events in August 1945 ought to have proven that countries were themselves outmoded. Because, when the United States (still the only country, ever, to do so) slaughtered hundreds of thousands of Japanese civilians with two atomic bombs, the whole game changed.

At that point, for the first time in organized human history and due to the fantastically destructive power of nuclear weapons, a single nation could end the world within minutes. It is that sort of planet that the human race has inhabited for 75 years. And we aren’t scared enough. Until the invention and proliferation of atomic and hydrogen bombs, no single state or empire possessed world-ending power. Even Alexander the Great, Genghis Khan and Adolf Hitler were eventually checked by coalitions of convenience and necessity. The Macedonian spearmen were halted by determined Afghan tribesmen; Mongol horsemen were held off by Egyptian and European armies; and as for the Nazis, the paradoxical duo of the Soviets and the Americans had their number.

The near certainty of planet-destroying nuclear winter in the event of major war has forever changed the entire geopolitical calculus. Or, at least, it should have. These days, a “rogue” state like North Korea, or eventually the Czech Republic or Bhutan, could end the world. Such a ludicrously tenuous situation clearly demonstrates that the only rational model of geopolitics capable of avoiding catastrophe, whether due to nuclear annihilation or collective climate suicide, is some sort of world government.

The United Nations or the European Union (but not military-focused NATO) represent the only rational model for compromise, conversation and war avoidance. Only today, in a paragon of inherent human irrationality, it is precisely such models against which Western (Trump, Brexit, Orban), and other (Bolsonaro, Putin, Xi Jinping) governments react. Collective delusion—reflected in the populist, rightward, authoritarian global political wave—might just spell the end of organized human life on this planet. It seems that plenty of folks worldwide are riding nationalist nostalgia right to the edge of extinction. These sorts of strongman leaders historically have poor records on communal action—exactly what’s now needed to save the world.

Perhaps the key metaphysical problem is this: Human beings simply don’t live long enough. Limited life spans inherently seem to encourage selfish, expedient, short-term, and thus delusional and destructive, thinking. In that sense, climate change, though it’s becoming increasingly imminent, may just be too big (and long-term, and existential) of a problem for the truncated life spans of most humans. Especially, it appears, among the wealthy elites clearly living it up in what may the last days of their species’ existence. Egyptian pharaohs, who once had themselves entombed with their worldly treasures, have a current equivalent in the CEOs set to drown in rising seas while their wealth is stashed in (far more virtual) mutual funds and subprime mortgage bundles.

As oceans flood the coasts, famine breaks out wholesale and resource-driven inter-state combat breaks out, my guess is that most desperate people will ignore John Lennon’s advice and turn toward religion—or the irrationality of the humanity-unique casino/gambling culture—to endure the absurdity of their existence. Perhaps eventually, though time is ever-so-short, people will force governments to unite, organize and (just barely) avoid disaster. I’m rooting for humanity, no doubt, but my own limited life experience has made me unlikely to bet on our species. 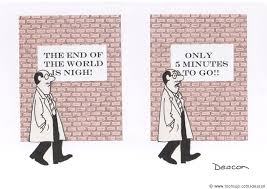 Danny Sjursen is a retired U.S. Army Major and regular contributor to Truthdig. His work has also appeared in Harper’s, The LA Times, The Nation, TomDispatch, The Huffington Post, and The Hill. He served combat tours with reconnaissance units in Iraq and Afghanistan and later taught history at his alma mater, West Point. He is the author of a memoir and critical analysis of the Iraq War, “Ghostriders of Baghdad: Soldiers, Civilians, and the Myth of the Surge.” He co-hosts the progressive veterans’ podcast “Fortress on a Hill.” Follow him on Twitter at @SkepticalVet.