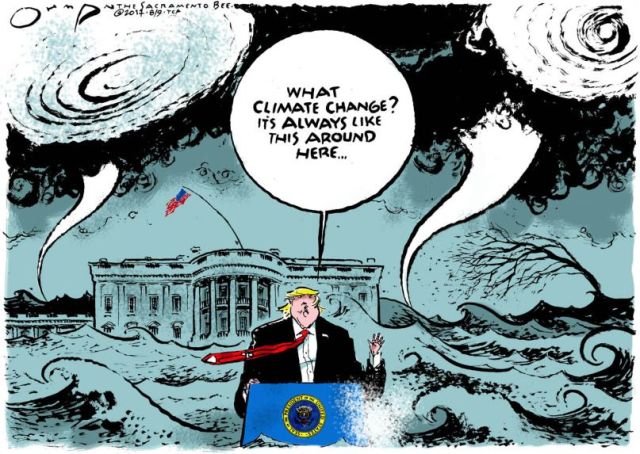 You can run from the climate crisis, but you can’t hide. On the front lines of this global environmental calamity, entire communities are being consumed by fire, submerged by typhoons and hurricanes, or baked under the sun amid historic droughts. President Donald Trump, the climate change denier in chief, has formally begun the process of withdrawing from the Paris Agreement. Originally signed by President Barack Obama in 2015, the accord established a cooperative, global path to limit global temperature rise to 1.5 degrees Celsius (2.7 degrees F) above preindustrial levels. The United States is now the only nation on the planet that has pulled out of the agreement. A new statement signed by over 11,000 scientists from over 150 countries warns of “untold suffering” unless global society undergoes a “major transformation.” Trump’s denial of the climate crisis is unconscionable and should be added to the articles of impeachment against him.

One Trump official with a role in both the climate crisis and in the impeachment proceedings is Wells Griffith, currently a special assistant to the president and senior director for international energy and environment for the National Security Council, serving under departing Energy Secretary Rick Perry. Griffith is a longtime Republican operative who served as deputy chief of staff to Reince Priebus when Priebus was chair of the Republican National Committee.

Wells Griffith’s appointment to the Department of Energy makes sense; his family has run a gas station in Mobile, Alabama, for over 50 years. Griffith moved from pumping gas to pushing coal, successfully negotiating the sale of 700,000 metric tons of coal from Pennsylvania to Ukraine in 2017.

He then showed up as the top representative of the Trump administration at the U.N.’s “COP 24” climate conference in Katowice, Poland, in December 2018. The U.S. held just one public event during the two-week summit, which Griffith chaired, promoting fossil fuel and nuclear energy. Amid mocking laughter and a walkout by protesters, he stated, “We strongly believe that no country should have to sacrifice economic prosperity or energy security in pursuit of environmental sustainability.”

Afterward, we approached Griffith in a large central hall of the convention center (which was designed to look like the coal mine that it was built on top of) to ask questions for the “Democracy Now!” news hour. To our shock, rather than answering, he bolted, first walking quickly, then running away. Cameras rolling, we ran after him, asking questions as we weaved in and out of the crowd of climate negotiators, scientists and activists.

“Do you agree with President Trump calling climate change a hoax? Can you talk about why the U.S. is here, since President Trump is saying he’s pulling the U.S. out of the Paris climate accord? Can you talk about why you’re pushing coal?” He dodged our questions, but did accuse us of harassing him. “A reporter asking you a question, sir, is not harassment,” we replied.

Just this Tuesday, Wells Griffith continued his refusal to answer questions when he failed to appear before the House Permanent Select Committee on Intelligence’s closed-door session of the Trump impeachment inquiry.

While public testimony is expected to begin next week, an unrelated court case is wrapping up in a New York state courtroom. New York is suing ExxonMobil, alleging the fossil fuel giant defrauded its investors for years by understating the risk that climate change posed to shareholder value. Rex Tillerson, the former CEO of ExxonMobil and Trump’s first secretary of state, testified at length under oath. He repeatedly claimed he could not recall details when grilled by the New York state attorneys.

Outside the courtroom, 30 children participating in the Fridays for Future weekly climate strike engaged in a die-in. Thirteen-year-old Maria Riker told us, “We held the die-in for 42 minutes, one minute for each of the 42 years that Exxon was aware of the dangers of climate change but lied about it.”

Tillerson’s successor, Secretary of State Mike Pompeo, announced Monday, via tweet, “Today we begin the formal process of withdrawing from the Paris Agreement.” Trump declared that the U.S. would withdraw in June 2017, but legal procedures in place when the agreement was signed have prevented the formal exit until now.

In response, 350.org founder and author Bill McKibben said on “Democracy Now!,” “The fossil fuel industry had its most profitable years in the last three decades. On the other hand, we’re now missing half the sea ice in the summer Arctic. The Great Barrier Reef is half-dead. The oceans are 30% more acidic. California is on fire more weeks than not. We’re in deep, deep trouble.”

The climate crisis imperils the planet. To deny it is impeachable, the highest of high crimes and misdemeanors.