Posted on September 4, 2018 by Arlen Grossman 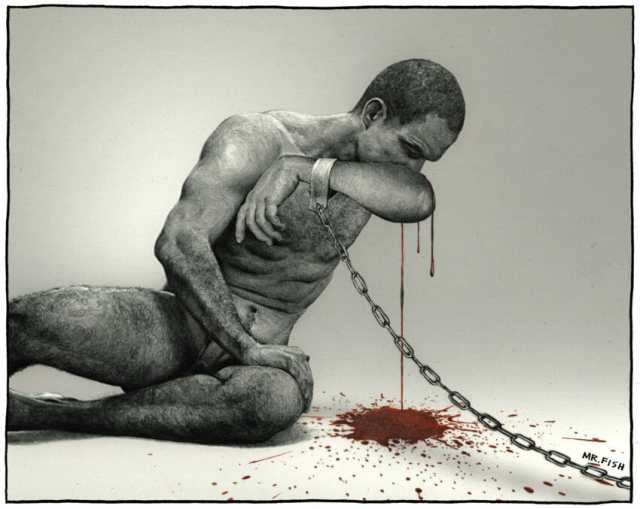 The only way to end slavery is to stop being a slave. Hundreds of men and women in prisons in some 17 states are refusing to carry out prison labor, conducting hunger strikes or boycotting for-profit commissaries in an effort to abolish the last redoubt of legalized slavery in America. The strikers are demanding to be paid the minimum wage, the right to vote, decent living conditions, educational and vocational training and an end to the death penalty and life imprisonment.

But they also know that no prison can function without the forced labor of many among America’s 2.3 million prisoners. Prisoners do nearly all the jobs in the prisons, including laundry, maintenance, cleaning and food preparation. Some prisoners earn as little as a dollar for a full day of work; in states such as Alabama, Arkansas, Georgia, South Carolina and Texas, the figure drops to zero.

Corporations, at the same time, exploit a million prisoners who work in prison sweatshops where they staff call centers or make office furniture, shoes or clothing or who run slaughterhouses or fish farms.

If prisoners earned the minimum wage set by federal, state or local laws, the costs of the world’s largest prison system would be unsustainable. The prison population would have to be dramatically reduced. Work stoppages are the only prison reform method that has any chance of success. Demonstrations of public support, especially near prisons where strikes are underway, along with supporting the prisoners who have formed Jailhouse Lawyers Speak, which began the nationwide protest, are vital. Prison authorities seek to mute the voices of these incarcerated protesters. They seek to hide the horrific conditions inside prisons from public view. We must amplify these voices and build a popular movement to end mass incarceration.

The strike began Aug. 21, the 47th anniversary of the 1971 killing of the Black Panther prison writer and organizer George Jackson in California’s San Quentin. It will end Sept. 9, the 47th anniversary of the 1971 Attica prison uprising. It is an immensely courageous act of civil disobedience. Prison authorities have innumerable ways to exact retribution, including placing strikers in solitary confinement and severing communication with the outside world. They can take away the few privileges and freedoms, including the limited freedom of movement, yard time, phone privileges and educational programs, that prisoners have. This makes the defiance all the more heroic. These men and women cannot go elsewhere. They cannot remain anonymous. Retribution is certain. Yet they have risen up anyway.

In addition to making demands about wages, the prisoners are calling for an end to the endemic violence that plagues many prisons. During a riot in April at Lee Correctional Institution, a maximum-security prison in South Carolina, seven prisoners were killed and 17 were injured as prison guards waited four hours to intervene.

Prisons in America are a huge and lucrative business. The private prison contractors Corrections Corporation of America and The GEO Group have annual revenues of $1.6 billion and more than $2 billion, respectively. They spent a combined $8.7 million on lobbying from 2010 through 2015, according to OpenSecrets.org. Global Tel Link, which runs the privatized phone services in many prisons, is valued at $1.2 billion. The food service corporation Aramark, a $8.65 billion company, has contracts in 500 prisons across the country although it has been accused of serving contaminated and spoiled food that has led to food poisoning. The money transfer corporation JPay Inc. is a subsidiary of the telecommunications firm Securus Technologies, which is owned by the private equity firm Abry Partners. JPay made $53 million in 2014 on transfers of $525 million, through an average charge of 10 percent to those sending money to prisoners. Corizon Health has a contract to provide health care to more than 300,000 prisoners nationwide. It earns about $1.4 billion a year. And there are many other corporations with equally large revenues and profit margins within the prisons.

Private corporations exploit prison labor in at least 40 states. In some cases these workers are paid next to nothing. They have no benefits, including Social Security participation, and cannot form unions or organize. They are not paid for sick days. And if they complain or are seen as troublesome they are placed in solitary confinement, often for months.

Fyodor Dostoevsky wrote that “the degree of civilization in a society can be judged by entering its prisons.” Prisons expose how far a state will go to exploit and abuse its most vulnerable. Life in the American prison system is a window into the corporate tyranny that will be inflicted on all of us once we are stripped of the power to resist. The poorest families in the country are forced to pay an array of predatory fees to sustain incarcerated relatives. This is especially cruel to those children whose only contact with an incarcerated parent is through phone service that costs four or five times what it does on the outside. Prison life is one of daily humiliation and abuse. It entails beatings, torture, rape—especially for female prisoners who are preyed upon by prison staff—prolonged isolation, rancid food, inadequate heating and ventilation, substandard or nonexistent health care and being locked in a cage for days at a time, especially in supermax prisons.

Slavery within the prison system is permitted by the 13th Amendment of the U.S. Constitution, passed in 1865 at the end of the Civil War

to create a new form of slave labor. It reads: “Neither slavery nor involuntary servitude, except as punishment for crime whereof the party shall have been duly convicted, shall exist within the United States. …” Plantations in the South and industries such as Florida’s vast turpentine farm operations, which survived into the early 20th century, used the 13th Amendment to force black convicts to do the same uncompensated work that many had done as slaves.

“Imprisoned in stockades or cells, chained together at night or held under armed guards on horseback, the turpentine farms were bleak outposts miles from any chance of comfort or contact with the outside world,” Douglas A. Blackmon writes in “Slavery by Another Name,” a description of convict life for tens of thousands of African-Americans that is eerily similar to today’s prison conditions. “Workers were forced to buy their own food and clothes from a camp commissary and charged usurious interest rates on the salary advances used to pay for the goods—typically at least 100 percent.”

Prisons, which contain mostly poor people of color, over half of whom have never physically harmed anyone, are part of the continuum of slavery, Black Codes, Jim and Jane Crow, convict leasing, lynching and the lethal, indiscriminate force used by police on city streets. Prisons are not primarily about crime. They are about social control. They are about profiting off black and brown bodies, bodies that in blighted, deindustrialized neighborhoods do not produce money for corporations but once locked away generate some $60,000 a year per prisoner for prison contractors, police, parole agencies, corrections officers, phone companies, private prisons, money transfer companies, medical companies, food venders, commissaries and the industries that manufacture body armor, pepper spray and the gruesome array of restraints and implements—four- and five-point restraints, restraint hoods, restraint belts, restraint beds, stun grenades, stun guns, stun belts, spit hoods, body orifice security scanners (BOSS chairs), tethers, and waist and leg chains—that look like a collection amassed by the Marquis de Sade. Prisons are also where we warehouse the poor who are mentally ill. It is estimated that 25 percent of the prison population has severe mental illness. Those with crippling mental disorders are given not therapy but cocktails of powerful psychotropic drugs that turn them into zombies sleeping 20 hours a day.

Once corporations moved manufacturing overseas and denied those in poor communities the possibility of a job that could sustain them and their families, they began to extract billions in profit by putting bodies in cages. Since 1970 our prison population has grown by about 700 percent. We have invested $300 billion in prisons since 1980. The prison-industrial complex mirrors the military-industrial complex. The money is public; the profits are private. Those who enrich themselves off the incarcerated are morally no different from those who enriched themselves from the slave trade.

Prisoners, once released, often after decades, commonly suffer from severe mental and physical trauma and other health problems including diabetes (which is an epidemic in prisons because of the poor diet), hepatitis C, tuberculosis, heart disease and HIV. They do not have money or insurance to get treatment for their illnesses when they are released. They have often become alienated from their families and are homeless. Stripped of the right to public assistance, unable to vote, banned from living in public housing, without skills or education and stigmatized by employers, they become members of the vast criminal caste system. Many are burdened with debts because of monetary charges in the criminal justice structure and a predatory system of prison loans. Over 60 percent end up back in prison within five years. This is by design. The lobbyists for the prison-industrial complex make sure the laws and legislation keep the prisons full and recidivism high. This is good for profit. And it is profit, not justice, that is the primary force behind mass incarceration. This system will end only when those profits are wrested from the hands of our modern slaveholders. The only people who can do that are the slaves and the abolitionists who fight alongside them.

The full list of national demands from “the men and women in federal, immigration, and state prisons” reads:
1. Immediate improvements to the conditions of prisons and prison policies that recognize the humanity of imprisoned men and women.

2. An immediate end to prison slavery. All persons imprisoned in any place of detention under United States jurisdiction must be paid the prevailing wage in their state or territory for their labor.

3. The Prison Litigation Reform Act must be rescinded, allowing imprisoned humans a proper channel to address grievances and violations of their rights.

4. The Truth in Sentencing Act and the Sentencing Reform Act must be rescinded so that imprisoned humans have a possibility of rehabilitation and parole. No human shall be sentenced to death by incarceration or serve any sentence without the possibility of parole.

5. An immediate end to the racial overcharging, over-sentencing, and parole denials of black and brown humans. Black humans shall no longer be denied parole because the victim of the crime was white, which is a particular problem in southern states.

7. No imprisoned human shall be denied access to rehabilitation programs at their place of detention because of their label as a violent offender.

8. State prisons must be funded specifically to offer more rehabilitation services. 9. Pell grants must be reinstated in all U.S. states and territories.

10. The voting rights of all confined citizens serving prison sentences, pretrial detainees, and so-called “ex-felons” must be counted. Representation is demanded. All voices count!