TRUMP: WHAT CAN WE DO?

Our Democracy Could Be Sunk By a President Adrift

WASHINGTON — The truth can no longer be ignored: Donald Trump is dangerously unfit to be president and could lead the nation to unthinkable disaster. So what are we going to do about it?

The White House “has become an adult day care center,” where the president’s senior aides spend “every single day … trying to contain him.” That terrifying bit of information was disclosed Sunday by Senate Foreign Relations Committee Chairman Bob Corker, R-Tenn., whose decision not to run for re-election has freed him to point out that the emperor is indeed naked.

“Look, except for a few people, the vast majority of our caucus understands what we’re dealing with here,” Corker told The New York Times. His colleagues in the GOP Senate majority “understand the volatility that we’re dealing with and the tremendous amount of work that it takes by people around [Trump] to keep him in the middle of the road.” Trump treats the presidency as if it were “a reality show” and is so erratic that he could put us “on the path to World War III.”

The shocking thing is that Corker is merely saying out loud what many others say in private. Trump is not qualified, by temperament or character, to exercise the awesome powers of the presidency. A man who acts like a bratty, vindictive child has been given the power to launch nuclear weapons.

He has three years and three months remaining in his presidential term. What are we going to do? 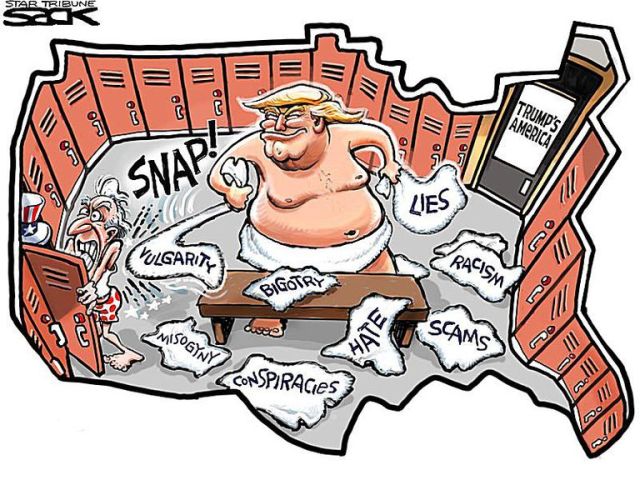 Corker counts on “those people who are closely working with him, what I would call the good guys” — Secretary of State Rex Tillerson, Defense Secretary Jim Mattis and chief of staff John Kelly — to keep the apocalypse at bay. But no one can prevent all potential damage. Trump petulantly sabotages the health care system because it bears his predecessor’s name. He cynically amplifies white racial grievance for political gain. He unnerves our longtime allies and recklessly goads our adversaries. He lies so shamelessly that he defiles the honor of the office held by Washington and Lincoln.

The alarming problem isn’t Trump’s policies, to the extent he has any coherent set of policy positions. This crisis isn’t about conservative governance versus progressive governance. It’s about soundness of mind and judgment.

The Constitution does not offer much of a playbook for the situation we find ourselves in. Impeachment is reserved for “high crimes and misdemeanors” — a phrase that means anything Congress wants it to mean. Assume special counsel Robert Mueller eventually concludes that Trump obstructed justice or even participated in a collusion scheme with the Russians. Would Speaker Paul Ryan and the Republican majority in the House actually move to impeach the president? Or would they be too fearful of the wrath of the GOP base? Unless the evidence were overwhelming, would there really be enough votes in the Senate to remove Trump from office?

I’m skeptical on all counts. Impeachment is, and will remain, a very long shot.

The 25th Amendment allows the vice president and a majority of the Cabinet to relieve Trump of his powers, with Congress the ultimate arbiter if Trump were to protest. But this procedure — intended for when a president suffers, for example, a debilitating stroke — looks plausible only as a fail-safe mechanism if the president literally starts howling at the moon and trying to launch nuclear missiles. Let’s pray it doesn’t come to that.

Our most likely course of action is containment. The generals who play nanny at the “adult day care center” are already acting as the first line of defense. Corker and his colleagues in Congress must begin acting as the second.

Congress has great powers of investigation and oversight. The House has primacy in exercising the power of the purse; the Senate has the responsibility to advise and grant — or withhold — consent. Back in January, Ryan and Senate Majority Leader Mitch McConnell might have dreamed that Trump, whatever his failings, would at least allow them to implement an orthodox GOP agenda. By now they must realize how wrong they were.