POLICEMEN OF THE WORLD

Trump’s UN speech makes it clear that Trump’s presidency, in terms of his campaign promise to remove Washington from the “policeman of the world” role, exit the Middle East, and repair the damaged relations with Russia, is over. The CIA and the military/security complex are in full control of the US government. Trump has accepted his captivity and his assigned role as the enforcer of Washington’s hegemony over every other country. Washington uber alles is the only foreign policy that Washington pursues.

At the UN Trump actually threatened to wipe North Korea off of the face of the earth. He added to this threat threats against Venezuela (http://stephenlendman.org/2017/09/trump-threatens-venezuela/ [1]) and Iran. He demonized these countries as “rogue states,” but it is Washington that is playing that role. Washington has destroyed in whole or part eight countries in the young 21st century and has 3 to 5 more in its crosshairs.

One question is: why did not the UN audience shout Trump down, a man standing before them telling obvious lies? The answer, of course, is money. The US taxpayers pay roughly one-quarter of the UN’s annual budget, leaving the other 130+ countries a light load. Washington is succeeding in driving the world to Armageddon, because the world’s leaders prefer money to truth, to justice, to survival. The UN diplomats see in their cooperation with Washington the opportunity to make money by sharing in the West’s exploitation of their own countries. 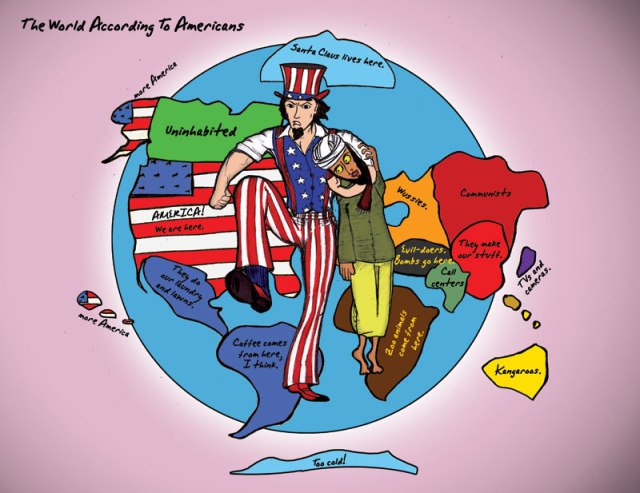 Washington, absorbed in its effort to destroy Syria, left it to its Saudi Arabian puppet to destroy Yemen. The Saudi autocracy, a major sponsor with the US of terrorism, has done a good job, thanks to US supplying the weapons and to the US refueling the Saudi attack airplanes. This totally gratuitous war has helped to maximize the profits of the American military/security complex, a collection of evil never before present on the face of the earth. UNICEF reports that one million Yemeni children will be the victims of “American compassion” of which Trump bragged in the CIA’s UN speech.

To be frank. The point is this. Unless Russia and China can take out the US, the US will take out Russia and China. The only question is who strikes first. The only way to avoid this is for Russia and China to surrender and accept Washington’s hegemony. This is the firm undeviating path on which the neoconservatives, the CIA, and the military/security complex have set the United States. The entire point of North Korea is US nuclear missiles on China’s border. The entire point of Iran is US nuclear missiles on Russia’s border.

As far as I can ascertain, hardly anyone is aware that Armageddon is just around the corner. There is no protest from the Western presstitutes, a collection of whores. In the US the only protests are against ancient “civil war” statues, which the ignorant rabble say are symbols of black slavery. There is no peace movement and no peace marches. In London the transgendered and the radical feminists are protesting one another, engaging in fist fights in Hyde Park. http://www.dailymail.co.uk/news/article-4891484/Fists-fly-politically-correct-rally.html [2] No one seems to have any awareness.

In US online propaganda websites such as Americans for Limited Government—funded by who? serving who?—endorse Trump’s destabilizing UN speech as a non-threat to world peace:

“President Trump has provided a cogent and inspiring defense of America and the American constitutional system of governance to the world not as imposition but an example to be followed, while at the same time respecting the sovereignty of other nations. However, the President also made it clear to those nations that threaten humanity with nuclear destruction [which Washington has done to N. Korea and Iran] that the United States will not be held hostage, and continuing down their current paths guarantees their annihilation. While many will focus on Trump’s threat to North Korea and Iran, the real focus of his speech is that it is a call to all nations to embrace their own sovereignty without threatening world peace.”

I have never in my long life read such a misrepresentation of a speech. The United States has become the complete propaganda state. No truth ever emerges.

It is only the US government, which is not a government of the people, that has ever threatened another country with total destruction as Trump did to North Korea in the CIA’s UN speech.

This is a first. It trumps Adolf Hitler. The US has become the 4th Reich. It is doubtful that the world will survive the foreign policy of the United States of America.