US State Department considers dropping ‘democracy’ from its mission statement

The US State Department is considering dropping “democracy” from its key mission statement as Secretary of State Rex Tillersonorders his department to redefine its purpose to the world.

The draft statements under review right now are similar to the old mission statement, except for one thing – any mention of promoting democracy is being eliminated.

According to an internal email that went out on Friday, the State Department’s Executive Steering Committee convened a meeting of leaders to draft new statements on the department’s purpose, mission and ambition, as part of the overall reorganisation of the State Department and USAID. (The draft statements were being circulated for comment on Friday and could change before being finalised.)

–The State Department’s draft statement on its purpose is: “We promote the security, prosperity and interests of the American people globally.”

–The State Department’s draft statement on its ambition is: “The American people thrive in a peaceful and interconnected world that is free, resilient and prosperous.”

Compare that to the State Department Mission Statement that is currently on the books, as laid out in the department’s fiscal year 2016 financial report:

“‘The Department’s mission is to shape and sustain a peaceful, prosperous, just, and democratic world and foster conditions for stability and progress for the benefit of the American people and people everywhere. This mission is shared with the USAID, ensuring we have a common path forward in partnership as we invest in the shared security and prosperity that will ultimately better prepare us for the challenges of tomorrow.'” 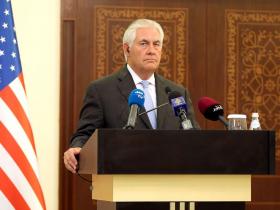 Former senior State Department officials from both parties said eliminating “just” and “democratic” from the State Department’s list of desired outcomes is neither accidental nor inconsequential.

“The only significant difference is the deletion of justice and democracy,” said Elliott Abrams, who served as deputy national security adviser for global democracy strategy during the George W Bush administration. “We used to want a just and democratic word, and now apparently we don’t.”

The mission statement is important because it sends a signal about American priorities and intentions to foreign governments and people around the world, said Mr Abrams, who was considered by Mr Tillerson for the job of deputy secretary of state but rejected by President Trump.

“That change is a serious mistake that ought to be corrected,” he said. “If not, the message being sent will be a great comfort to every dictator in the world.”

Tom Malinowski, who served as assistant secretary of state for democracy, human rights and labour for the Obama administration, said the new proposed mission statement brings US foreign policy into closer alignment with that of some of America’s chief adversaries, including Russia.

“It’s a worldview similar to that of Putin, who also thinks that great powers should focus exclusively on self protection and enrichment, rather than promoting democracy,” he said. “By removing all reference to universal values and the common good it removes any reason for people outside the United States to support our foreign-policy. That said, I appreciate the honesty with which Tillerson projects his cynicism.”

Mr Malinowski also predicted that the change, if it becomes permanent, would sow confusion throughout the ranks of the State Department’s civil and foreign service because hundreds of State Department officials work on congressionally funded programmes every day that are meant to promote democracy and justice abroad.

“We do not seek to impose our way of life on anyone, but rather to let it shine as an example for everyone to follow,” Mr Trump said.

The changes in the State Department mission statement may not seem very significant viewed in isolation. But Mr Tillerson has made several statements and decisions that indicate he plans to lower the priority of democracy and human rights in US foreign policy.

“It’s just so gratuitous. What efficiency is achieved or money is saved by taking something that is prominent on the Internet and hiding it?” said Mr Malinowski. “The consequence is that it’s the 9,456th signal sent by the administration that they don’t care about promoting American values.”

3 Responses to WHO NEEDS DEMOCRACY ANYWAY?