ALMOST IMMEDIATELY AFTER the 9/11 attack, while bodies were still buried in the rubble, George W. Bush demanded from Congress the legal authorization to use military force against those responsible for the attack, which everyone understood would start with an invasion of Afghanistan. The resulting resolution that was immediately cooked up was both vague and broad, providing that “the President is authorized to use all necessary and appropriate force against those nations, organizations, or persons he determines planned, authorized, committed, or aided the terrorist attacks that occurred on September 11, 2001, or harbored such organizations or persons.”

Despite this broadness, or because of it, the House of Representatives on September 14 approved the resolution by a vote of 420-1. The Senate approved it the same day by a vote of 98-0. The lone dissenting vote was Democratic Rep. Barbara Lee of California, who — three days after the 9/11 attack, in a climate of virtually full-scale homogeneity — not only voted “no” but stood up on the House floor to deliver this eloquent, unflinching and, as it turns out, extremely prescient explanation for her opposition:

In an op-ed she published in the San Francisco Chronicle nine days later, she explained her vote by pointing out that the resolution “was a blank check to the president to attack anyone involved in the Sept. 11 events — anywhere, in any country, without regard to our nation’s long-term foreign policy, economic and national security interests, and without time limit.” She added: “A rush to launch precipitous military counterattacks runs too great a risk that more innocent men, women, children will be killed.” 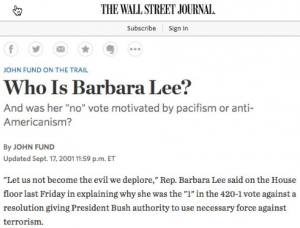 For her lone stance, Lee was deluged with rancid insults and death threats to the point where she needed around-the-clock bodyguards. She was vilified as “anti-American” by numerous outlets including the Wall Street Journal. The Washington Times editorialized on September 18 that “Ms. Lee is a long-practicing supporter of America’s enemies — from Fidel Castro on down” and that “while most of the left-wing Democrats spent the week praising President Bush and trying to sound as moderate as possible, Barbara Lee continued to sail under her true colors.” Since then, she has been repeatedly rejected in her bids to join the House Democratic leadership, typically losing to candidates close to Wall Street and in support of militarism. I documented numerous other ugly attacks when I wrote about her for The Guardian in 2013.But beyond the obvious bravery needed to take the stand she took, she has been completely vindicated on the merits. Close to a majority of Americans now believes that the first war the AUMF was invoked to launch — the one in Afghanistan — was a mistake. Fifteen years later, the very same AUMF continues to be used by the Obama administration for all sorts of wars that plainly have nothing to do with the 9/11 attacks — including its newfound bombing partnership with Russia in Syria. Under this resolution, Obama has bombed seven predominantly Muslim countries in seven years; a 2013 memofrom the Congressional Research Service, requested by Lee, listed all the military actions and related abuses undertaken purportedly under its authority: 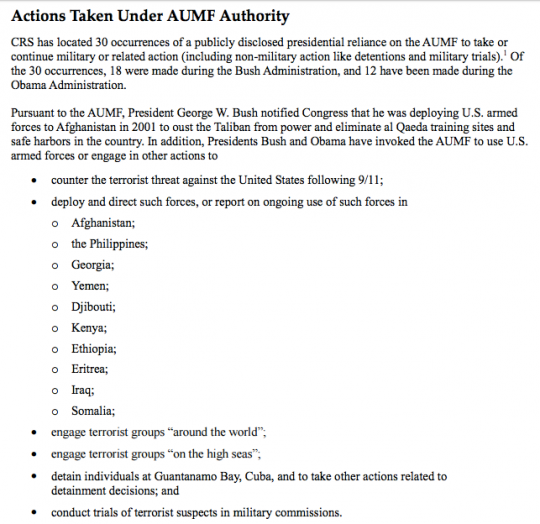 It’s impossible to overstate how correct Lee was when she warned that this resolution would constitute “a blank check” to wage war “anywhere, in any country,” and “without time limit.” Fifteen years later, this “war” is raging as destructively as ever, with no end in sight. Indeed, as my Intercept colleague Alex Emmons documented today, “Fifteen years after the September 11 attacks, it looks like the war on terror is still in its opening act.” Either one of the two leading presidential candidates is certain to use this resolution for all new expressions of this war.

Lee has never given up on this cause, repeatedly attempting to lead a repeal of the AUMF, though — in the face of opposition from two successive administrations, one from each party — she has never been able to convince her colleagues to do so. While her “blank check” warning turned out to be incredibly prescient, the other warning she issued, from the House floor on September 14, was even more profound: “Let us not become the evil we deplore.”

The 9/11 attack killed close to 3,000 innocent people, but the 15 years of wars, bombings, invasions, occupations, and other abuses it spawned — the bulk of which are still raging — have killed many, many more than that. Americans love to memorialize the victims of the 9/11 attacks, though the abundant victims of their own government’s actions (both leading up to 9/11 and in response to it) are typically ignored. Whatever else 9/11 is used to commemorate, Barbara Lee’s visionary warnings and solitary courage should always be near the top of that list.

2 Responses to BARBARA LEE WAS RIGHT!