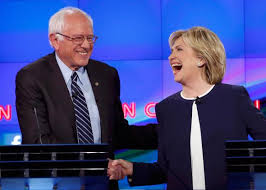 Being a Bernie supporter, I was naturally impressed with his positions and his performance last night. He stated his views vigorously and unapologetically (with the possible exception of his position on guns). At the same time, Hillary also was impressive. Although I thought Bernie did the best, I would have to concede that the real winner last night was probably Hillary (as well as the Democratic Party). I say that because I believe the race is Hillary’s to lose, and she certainly didn’t lose any ground last night. She looked and sounded good, and the corporate media is making sure everyone knows it. It will be tough for Bernie to catch up with her, although he’s making a valiant effort.

I also think the debates will discourage Joe Biden from throwing his hat in the ring (his only real chance would have been if Hillary faltered). The other three candidates, O’Malley, Webb and Chaffee, must as well pack up their bags and go home.

6 Responses to THE REAL DEBATE WINNER