WAR ON THE POOR 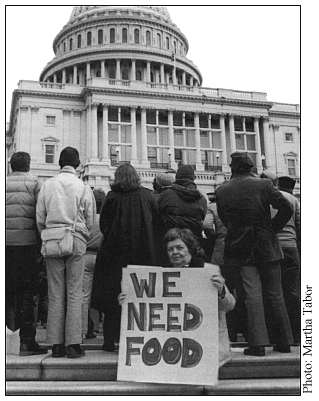 The past year hasn’t been a good one for poor people in America.

Then, the government shut down – over GOP opposition, in John Boehner’s House of Representatives, to expanding health-care coverage to the poor. And, while it was shut down, programs like Women, Infants, and Children – also called WIC – which provides vital nutritional assistance to mothers and babies, began turning away new applicants in several states.

Now, the government is open again – but the GOP is doubling down. For this story, I tried to ponder the worst policies – ideas now in play that will push poor Americans, and in particular, poor women and kids, ever deeper into poverty – but I realize the choices are legion.

Republicans are still pushing for $40 billion of cuts to food stamps over the next decade. The Supreme Court gutted the Voting Rights Act, and states such as Texas and North Carolina, led by GOP-run legislatures and governors, immediately responded by passing laws that make it harder for poor people to vote. These voter ID laws also make it harder for women who have changed their names because of marriage or divorce to prove that they are who they say they are.

And, despite the Affordable Care Act and the health-insurance exchanges coming online (albeit it in a particularly shoddy, dysfunctional manner), for millions of Americans too poor to qualify for government subsidies, their own state governments ensured that they would still remain without access to health care by refusing to expand Medicaid. Even though the feds agreed to pick up almost the entirety of this expansion’s costs.

This is in an era where, by the government’s own measure, 15 percent of Americans – roughly 50 million people – live in poverty. An age in which we no longer do a double take when we hear that nearly one in four American kids nationally – and in much of the South, one in three children – live at or below the poverty line. The failure of our political leaders to tackle this rampant hardship, and their willingness to instead propose ever-harsher austerity measures, represents a moral catastrophe.

When the U.S. House of Representatives had the chance to vote on a $10-an-hour minimum wage in March – a rate that California’s legislature has since voted to adopt, using the somewhat sensible logic that a minimum wage ought to provide workers with enough income to pay their basic bills – every single GOP congressman voted “no.”

Yet the same Republican majority supports a budget plan that would reduce the top tax rate – paid by wealthy Americans – from 39.6 percent to 25 percent, presumably further denuding the government’s ability to fund basic public infrastructure and safety-net programs.

Around the country, elected officials have been pushing proposals aimed either at humiliating those in poverty or ensuring that more people end up impoverished. These policies aren’t always enacted, but, cumulatively, they are shifting the needle rightward in how we as a nation think about, and respond to, poverty. Designing methods to hurt vulnerable people seems to have become something of a national sport these days, and not only in bastions of conservatism like Alabama and Mississippi.

Liberal California, for example, has seen its fair share of awful ideas – from Gov. Jerry Brown’s attempts to set limits on how many funded doctor’s visits Medicaid recipients could have in a given year to recurring proposals to impose strict time limits upon Temporary Assistance for Needy Families recipients.

“It’s deeper than favorite bad policies,” says Jim Wallis, president of the Washington, D.C.-based anti-poverty organization Sojourners, when asked what particularly egregious approaches to poor people and to poverty have been rolled out by state and federal politicians in recent months.

He shared with a story: “I’m in the office of a U.S. senator, part of the gang working on fiscal stuff. He’s a moderate centrist. I say, ’Now, Senator, you and I could easily think of 12 senators who could sit at this table and work out a path to fiscal responsibility, couldn’t we?’

“‘And we could do so while protecting the poor and vulnerable?’

And compromised they are these days. Here are the 10 worst public-policy ideas when it comes to America’s poor.

Coming in at No. 1 would have to be the current proposal to cut $40 billion from food stamps. This program is virtually the only part of the safety net that hasn’t already been shredded. As a result, almost everyone in poverty in America is either on the program or eligible for it.

More than 47 million Americans use food stamps. For 4 million people, food stamps actually serve to raise family incomes above the poverty line. It is, quite simply, a buffer between economic insecurity and hunger.

But current GOP proposals would remove 3.5 million Americans, in particular, able-bodied adults, from the program, and would impose time limits on many individuals’ participation.

In 2012, when he introduced the idea of significant cuts to food stamps, Paul Ryan, chairman of the House Budget Committee, averred that “we don’t want to turn the safety net into a hammock that lulls able-bodied people to lives of dependency and complacency, that drains them of their will and their incentive to make the most of their lives.”

That’s right: Depriving millions of Americans of access to food is the surest way to empty America’s overcrowded hammocks – whatever that nonsensical image is intended to convey.

It’s probably also the surest way to ensure that malnutrition re-emerges across the land.

An almost equally bad idea to removing food stamps from millions of people surely has to be state-level GOP opposition to allowing poor adults onto their Medicaid rolls. Despite the fact the feds will pick up all of the cost of this expansion for the first three years, and 90 percent thereafter, a slew of states, and almost the entirety of the South, have opted out of this expansion.

“The 26 states that have rejected the Medicaid expansion are home to about half of the country’s population, but about 68 percent of poor, uninsured blacks and single mothers. About 60 percent of the country’s uninsured working poor are in those states. Among those excluded are about 435,000 cashiers, 341,000 cooks and 253,000 nurses’ aides,” wrote New York Times reporters Sabrina Tavernise and Robert Gebeloff last month.

Making it harder for poor people to qualify for medical care is a really, really bad idea. It results in unnecessary illnesses and deaths, and it’s expensive. Throwing millions of people into the emergency-room system instead of giving them access to primary-care doctors ends up costing everyone else – taxpayers, health-insurance companies, those buying their own insurance premiums – a fortune.

Bad idea No. 3 is another ill-starred food-stamp-reform proposal. In addition to simply axing billions of dollars from food stamps, Wisconsin Rep. Paul Ryan also wants to convert the program, which is currently an entitlement, into a block grant given to the states.

How did that work during welfare reform nearly two decades ago, when Aid to Families with Dependent Children was shifted to Temporary Assistance to Needy Families, and turned into a block grant in 1996? Great – if you’re looking for a pot of federal money to raid for projects that have nothing to do with the well-being of those on welfare. And not so great if you’re a poor family in need of assistance.

At a state level, food stamps have already started being cut: Kansas’ GOP Gov. Sam Brownback recently reinstituted work requirements for able-bodied, adult food-stamps recipients – requirements normally waived during periods of high unemployment for the fairly obvious reason that there is no work for these unemployed men and women to do.

Brownback didn’t get the logic: After removing 15,000 people from his state’s welfare rolls, he has now embraced an approach to food stamps that will likely remove 20,000 of his state’s 90,000 food-stamps recipients from the program. This ranks No. 4 on our list of ugly policies.

That food stamps are now in the sights of slash-and-burn conservatives speaks to the shift rightward in popular consciousness when it comes to hunger.

Conservatives denounce President Barack Obama for being a “food-stamp president” and routinely imply – without providing proof – that the program is rife with fraud.

“They’re the same talking points we had before welfare reform,” argues Jessica Bartholow, of the Sacramento-based Western Center on Law and Poverty. “And we have a much smaller safety net now than we did 20 years ago. But the talking points are the same.”

For Bartholow, the slew of recent attacks against food stamps is part of a pattern of politicians seeking to score cheap points by showing their tough-on-poor-people bona fides via a rash of misguided proposals.

5. The Disqualification of ChapStick

Take, for example, the recent decision in Massachusetts, backed by Democratic Gov. Deval Patrick, to outlaw the purchase of cosmetics using TANF benefits. It sounds good: Why should we allow women on welfare to spend our tax dollars dolling themselves up?

But dig deeper, and the implications are horrendous, which is why this is bad idea No. 5.

For instance, should sunscreen be considered a “cosmetic”? Well, it’s often sold in the cosmetics aisle of a store, but its use is more akin to a medicine: Use it well, and you can limit your risk of skin cancer; don’t use it, and you are more likely to end up with the disease. If your skin is bad, and you go for a job interview – even though employers aren’t legally allowed to discriminate on the basis of looks in practice – a woman with no makeup and with poor skin may well be at a disadvantage in the search for work.

If you want to get that welfare recipient off of public assistance and into employment, making it more difficult for them to present themselves well at an interview seems counterproductive.

Is deodorant a cosmetic? Quite possibly. But, again, who wants to go for a job interview on a humid summer day in Massachusetts with pits sweating? While the legislation eventually excluded deodorant from the list of banned items, it’s entirely likely businesses will still err on the side of caution and refuse to sell deodorant to welfare customers. Is ChapStick a cosmetic? Yes, it is. But it also is necessary for stopping lips from blistering.

Taking away ChapSticks and deodorant is silly. But not nearly as silly as looking for ways to remove unemployment benefits from unemployed people, thus taking away what little remaining financial security their families have.

But, increasingly, states are looking to do just this. Florida’s attempts to do wholesale drug testing, not based on any reasonable suspicions, for all unemployment-insurance claimants. Taking away a family’s income source because mom or pop smokes pot occasionally might not make a whole lot of economic sense, but it plays into the tough-on-crime, tough-on-the-poor approach all too common in Florida – a state with nearly a million disenfranchised ex-felons.

Florida tried the same catchall drug-testing trick with TANF recipients in 2011 – but the courts ordered it to stop the practice.

In Utah, the courts haven’t intervened, since the state only tests people it has a “reasonable suspicion” are using drugs – and it offers treatment, accompanied by restored benefits to users. Not that this makes Utah’s policy fiscally sensible: Over the last year, according to ThinkProgress, it has spent more than $30,000 drug testing welfare applicants. How many people did it catch and remove from the welfare rolls? Twelve.