The Folly of Empire 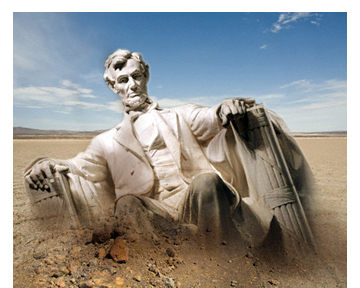 The final days of empire give ample employment and power to the feckless, the insane and the idiotic. These politicians and court propagandists, hired to be the public faces on the sinking ship, mask the real work of the crew, which is systematically robbing the passengers as the vessel goes down. The mandarins of power stand in the wheelhouse barking ridiculous orders and seeing how fast they can gun the engines. They fight like children over the ship’s wheel as the vessel heads full speed into a giant ice field. They wander the decks giving pompous speeches. They shout that the SS America is the greatest ship ever built. They insist that it has the most advanced technology and embodies the highest virtues. And then, with abrupt and unexpected fury, down we will go into the frigid waters.

The last days of empire are carnivals of folly. We are in the midst of our own, plunging forward as our leaders court willful economic and environmental self-destruction. Sumer and Rome went down like this. So did the Ottoman and Austro-Hungarian empires. Men and women of stunning mediocrity and depravity led the monarchies of Europe and Russia on the eve of World War I. And America has, in its own decline, offered up its share of weaklings, dolts and morons to steer it to destruction. A nation that was still rooted in reality would never glorify charlatans such as Sen. Ted Cruz, House Speaker John Boehner and former Speaker Newt Gingrich as they pollute the airwaves. If we had any idea what was really happening to us we would have turned in fury against Barack Obama, whose signature legacy will be utter capitulation to the demands of Wall Street, the fossil fuel industry, the military-industrial complex and the security and surveillance state. We would have rallied behind those few, such as Ralph Nader, who denounced a monetary system based on gambling and the endless printing of money and condemned the willful wrecking of the ecosystem. We would have mutinied. We would have turned the ship back. 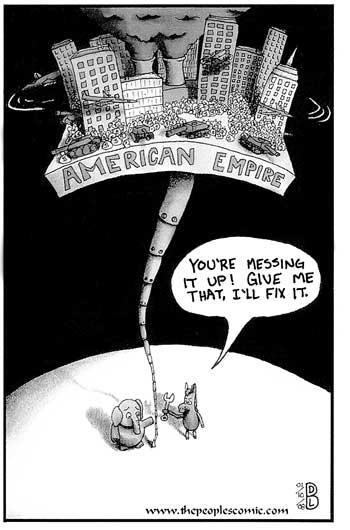 The populations of dying empires are passive because they are lotus-eaters. There is a narcotic-like reverie among those barreling toward oblivion. They retreat into the sexual, the tawdry and the inane, retreats that are momentarily pleasurable but ensure self-destruction. They naively trust it will all work out. As a species, Margaret Atwood observes in her dystopian novel “Oryx and Crake,” “we’re doomed by hope.” And absurd promises of hope and glory are endlessly served up by the entertainment industry, the political and economic elite, the class of courtiers who pose as journalists, self-help gurus like Oprah and religious belief systems that assure followers that God will always protect them. It is collective self-delusion, a retreat into magical thinking.

“The American citizen thus lives in a world where fantasy is more real than reality, where the image has more dignity than the original,” Daniel J. Boorstin wrote in his book “The Image: A Guide to Pseudo-Events in America.” “We hardly dare face our bewilderment, because our ambiguous experience is so pleasantly iridescent, and the solace of belief in contrived reality is so thoroughly real. We have become eager accessories in the great hoaxes of the age. These are the hoaxes we play on ourselves.”

Culture and literacy, in the final stage of decline, are replaced with noisy diversions and empty clichés. The Roman statesman Cicero inveighed against their ancient equivalent—the arena. Cicero, for his honesty, was hunted down and murdered and his hands and head were cut off. His severed head and his right hand, which had written the Philippics, were nailed onto the speaker’s platform in the Forum. The roaring crowds, while the Roman elite spat on the head, were gleefully told he would never speak or write again. In the modern age this toxic, mindless cacophony, our own version of spectacle and gladiator fights, of bread and circus, is pumped into the airwaves in 24-hour cycles. Political life has fused into celebrity worship. Education is primarily vocational. Intellectuals are cast out and despised. Artists cannot make a living. Few people read books. Thought has been banished, especially at universities and colleges, where timid pedants and careerists churn out academic drivel. “Although tyranny, because it needs no consent, may successfully rule over foreign peoples,” Hannah Arendt wrote in “The Origins of Totalitarianism,” “it can stay in power only if it destroys first of all the national institutions of its own people.” And ours have been destroyed.

Sensual pleasure and eternal youth are our overriding obsessions. The Roman emperor Tiberius, at the end, fled to the island of Capri and turned his seaside palace into a house of unbridled lust and violence. “Bevies of girls and young men, whom he had collected from all over the Empire as adepts in unnatural practices, and known as spintriae, would copulate before him in groups of three, to excite his waning passions,” Suetonius wrote in “The Twelve Caesars.” Tiberius trained small boys, whom he called his minnows, to frolic with him in the water and perform oral sex. And after watching prolonged torture, he would have captives thrown into the sea from a cliff near his palace. Tiberius would be followed by Caligula and Nero.

“At times when the page is turning,” Louis-Ferdinand Céline wrote in “Castle to Castle,” “when History brings all the nuts together, opens its Epic Dance Halls! hats and heads in the whirlwind! Panties overboard!”