Posted on November 6, 2012 by Arlen Grossman 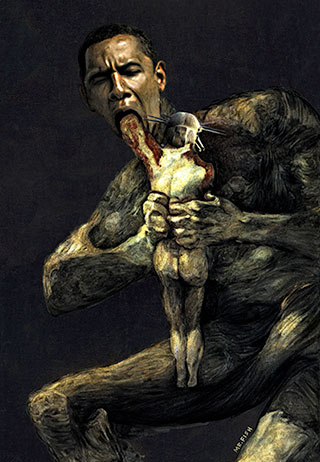 I learned at the age of 10, when I was shipped off to a New England boarding school where the hazing of younger boys was the principal form of recreation, that those who hunger for power are psychopathic bastards. The bullies in the forms above me, the sadistic masters on our dormitory floors, the deans and the headmaster would morph in later life into bishops, newspaper editors, college presidents, politicians, heads of state, business titans and generals. Those who revel in the ability to manipulate and destroy are demented and deformed individuals. These severely diminished and stunted human beings — think Bill and Hillary Clinton — shower themselves, courtesy of elaborate public relations campaigns and an obsequious press, with encomiums of piety, patriotism, devoted public service, honor, courage and vision, not to mention a lot of money. They are at best mediocrities and usually venal. I have met enough of them to know.

So it is with some morbid fascination that I watch Barack Obama, who has become the prime “dominatrix” of the liberal class, force us in this election to plead for more humiliation and abuse. Obama has carried out a far more egregious assault on our civil liberties, including signing into law Section 1021(b)(2) of the National Defense Authorization Act (NDAA), than George W. Bush. Section 1021(b)(2), which I challenged in federal court, permits the U.S. military to detain American citizens, strip them of due process and hold them indefinitely in military facilities. U.S. District Judge Katherine B. Forrest struck down the law in September. The Obama administration immediately appealed the decision. The NDAA has been accompanied by use of the Espionage Act, which Obama has turned to six times in silencing whistle-blowers. Obama supported the FISA Amendment Act so government could spy on tens of millions of us without warrants. He has drawn up kill lists to exterminate those, even U.S. citizens, deemed by the ruling elite to be terrorists.

Obama tells us that we better lick his boots or we will face the brute down the hall, Mitt Romney. After all, we wouldn’t want the bad people to get their hands on these newly minted mechanisms of repression. We will, if we do not behave, end up with a more advanced security and surveillance state, the completion of the XL Keystone pipeline, unchecked pillage from Wall Street, environmental catastrophe and even worse health care. Yet we know on some level that once the election is over, Obama will, if he is re-elected, again betray us. This is part of the game. We dutifully assume our position. We cry out in holy terror. We promise to obey. And we are mocked as we watch promises crumble into dust.

As we are steadily stripped of power, we desire with greater and greater fervor to be victims and slaves. Our relationship to corporate power increasingly mirrors that of ancient religious cults. Lucian writes of the priests of Cybele who, whipped into frenzy, castrated themselves to honor the goddess. Women devotees cut off their breasts. We are not far behind.

“Anyone who wants to rule men first tries to humiliate them, to trick them out of their rights and their capacity for resistance, until they are as powerless before him as animals,” wrote Elias Canetti in “Crowds and Power.” …

“He uses them like animals and, even if he does not tell them so, in himself he always knows quite clearly that they mean just as little to him; when he speaks to his intimates he will call them sheep or cattle. His ultimate aim is to incorporate them into himself and to suck the substance out of them. What remains of them afterwards does not matter to him. The worse he has treated them, the more he despises them. When they are no more use at all, he disposes of them as he does excrement, simply seeing to it that they do not poison the air of his house.”

Our masters rely on our labor to make them wealthy, on our children for cannon fodder in war and on our collective chants for adulation. They would otherwise happily slip us rat poison. When they retreat into their inner sanctums, which they keep hidden from public view, they speak in the cold words of manipulation, power and privilege, words that expose their visions of themselves as entitled and beyond the reach of morality or law.

The elite have produced a few manuals on power. Walter Lippmann’s “Public Opinion,” Leo Strauss’ work and “Atlas Shrugged” by the third-rate novelist Ayn Rand express the elite’s deep contempt for the sans-culottes. These writers posit that the masses are incapable of responding rationally to the complexities of power. They celebrate the role of a tiny, controlling elite that skillfully uses propaganda and symbols to, as Lippmann wrote, “manufacture consent.” They call on the power elite to operate in secrecy. The elite’s systems of propaganda are designed to magnify emotion and destroy the capacity for critical thought. Kafka was right: The modern world has made the irrational rational.

“Crowds have always undergone the influence of illusions,” wrote Gustave Le Bon, one of the first pioneers of the study of mass psychology. “Whoever can supply them with illusions is easily their master; whoever attempts to destroy their illusions is always their victim.”

“Those who have put out the people’s eyes,” John Milton wrote, “reproach them of their blindness.”