The Unspoken Reason For the Rise and Fall 0f America

Posted on September 4, 2012 by Arlen Grossman

“At any given moment there is an orthodoxy, a body of ideas of which it is assumed that all right-thinking people will accept without question. It is not exactly forbidden to say this, that or the other, but it is “not done” to say it…”  —George Orwell

There is a reason why America is failing. The bewilderment, frustration, anger, hate and fear seen in the eyes of so many of our fellow citizens is palpable. Our once promising experiment in freedom, democracy, and economic mobility veered off its promising path forty-some years ago, and has been floundering since.

How could we have allowed The Great American Dream to thrive and then expire in front of our eyes? I believe this tragedy happened because we went all in on an economic ideology that blew up in our faces. The story of this distressing turn of events will not be explained to the American people by the corporate news media because they are complicit in it. Besides, America’s defining economic religion has gone virtually unchallenged for generations and has nearly infinite money behind it.  This national economic religion, invulnerable to challenge, goes by the name of capitalism.

Sometimes referred to as the “free market” system or private enterprise, capitalism has a powerful core of fanatical true believers behind it. They are often rich and powerful, and dominate our political system and the media. For generations, America has been defined by its capitalist system, which for the most part helped build a great country, until all of it began to unravel in the mid-1970s. Even today, the American economic system works well for the country’s elite, the One Percent. But inequality has gotten so extreme that .000001% (400 people) of our population have accumulated more wealth than the bottom 50% (311 million). Left unspoken, until relatively recently, is that capitalism in its present form no longer works for the other 99 percent.

It is not said out loud, but capitalism–like communism in 1990– failed, and not for the first time. Our economy teetered on the verge of total collapse in 2008 until the banks were bailed out by the government. In other words, capitalism was rescued and resuscitated by socialism, just as in the 1930s.

A “free market” economy, if properly restrained, can be extraordinarily effective.  No other economic system has proven to be more innovative, creative, and productive. But it can be dangerous without checks and balances. Unregulated capitalism unleashes the kind of greed that ultimately devours everything in its path. Over time, we have allowed capitalism to spin out of control and for that mistake we are paying a heavy price today.

If you have any doubt, I offer a challenge. Tell me which problems in America are not caused or greatly aggravated by the greed that flourishes under an unfettered free market system. Other than problems caused by religious fundamentalism, you will have difficulty coming up with answers. For decades we have worshipped at the alter of the free market, where the individual is supreme and accumulation is regarded as virtue. It has gone way  too far.

Health care, war, crime, drugs, obesity, poverty, climate change–all these problems and more–result from or are exascerbated by the greed that is a natural byproduct of capitalism. The ultimate example is global climate change. Despite overwhelming evidence that man-made activity is gravely harming the planet and threatening our very existence, the response of powerful corporate and political leaders has been denial, inaction, and resistance, because tackling this problem would stand in the way of the endless pursuit of profit. Valuing short-term financial gain over the ruination of the planet is a shockingly cynical misplacement of priorities.

At one time, in reaction to early 20th century capitalist abuses, we had monopoly and antitrust laws, labor unions, banking controls, campaign finance rules, and other restrictions on  an unbridled free market.  As those at the top consolidated their power and convinced us of the “magic of the market,” those controls grew lax. Multinational corporations took advantage and now virtually rule this country and the world.

Even worse is the damage to our moral values. Where not long ago most of us were genuinely concerned about such evils as war, poverty, inequality, and social injustice, we now have large segments of self-indulgent Americans whose major concerns focus on lowering taxes, flaunting guns and military strength, and drastically reducing the role of government (except for their pet projects). Because of the influence of decades of free market propaganda and the drumbeat of consumerism, caring about the common good of our society has been buried underneath the preeminent right of each individual to accumulate financial wealth, no matter the cost to society as a whole. Capitalist greed has sucked the very soul, the quintessential decent instincts and values that used to be a part of our way of life, and has become an end in itself. Gordon Gekko’s mantra, “Greed is Good,” seems to be our national motto.

For America to get back on track, a fairer, more efficient mix of socialism and capitalism is necessary. It doesn’t come down as an either/or. There is no nation today, and never was, that succeeded as totally capitalistic or totally socialistic. All countries have a mix of both. Conservatives are comfortable with the government regulating child labor and in charge of national defense. Liberals have no problem with entrepreneurship and small businesses. Finding the proper balance should be the goal.  In America, we have tipped dangerously far over to the laissez-faire “free market” side.

Identifying the problem–rampant, unrestrained capitalism–is much harder than implementing a solution. The American economic system is so entrenched, and its major advocates so rich and powerful, an easy fix isn’t going to happen. Our current political system functions on the fuel of corporate money and the politicians it buys, so we can’t  look there for help reining in capitalist greed. 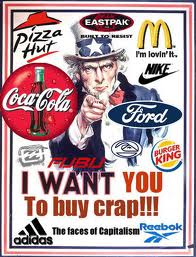 Conditions will have to get bad enough that people will take to the streets in huge numbers and demand radical change. The Occupy Wall Street movement made an attempt to mobilize the 99% but did not have the support of enough Americans to sustain it. The Tea Party movement attracted many frustrated citizens, but was coopted and corrupted by the One Percent.

When enough Americans from all segments of our society are ready to join a dedicated and radical movement to transform the hold of laissez-faire capitalist greed over our political and economic system, change will be possible and America can have a chance to return to what it once was. It won’t happen overnight, and the work of educating and convincing the 99% must be a priority for those who care about democracy, equal justice, and economic opportunity, the principles this great, but now struggling, nation was founded upon. The rise of that movement cannot wait much longer.