President Obama is slamming Mitt Romney for heading companies that were “pioneers in outsourcing U.S. jobs,” while Romney is accusing Obama of being “the real outsourcer-in-chief.”

These are the dog days of summer and the silly season of presidential campaigns. But can we get real, please?

The American economy has moved way beyond outsourcing abroad or even “in-sourcing.” Most big companies headquartered in America don’t send jobs overseas and don’t bring jobs here from abroad.

That’s because most are no longer really “American” companies. They’ve become global networks that design, make, buy, and sell things wherever around the world it’s most profitable for them to do so.

As an Apple executive told the New York Times, “we don’t have an obligation to solve America’s problems. Our only obligation is making the best product possible.” He might have added “and showing profits big enough to continually increase our share price.”

Forget the debate over outsourcing. The real question is how to make Americans so competitive that all global companies — whether or not headquartered in the United States — will create good jobs in America.

Apple employs 43,000 people in the United States but contracts with over 700,000 workers overseas. It assembles iPhones in China both because wages are low there and because Apple’s Chinese contractors can quickly mobilize workers from company dorms at almost any hour of the day or night.

But low wages aren’t the major force driving Apple or any other American-based corporate network abroad. The components Apple’s Chinese contractors assemble come from many places around the world with wages as high if not higher than in the United States.

More than a third of what you pay for an iPhone ends up in Japan, because that’s where some of its most advanced components are made. Seventeen percent goes to Germany, whose precision manufacturers pay wages higher than those paid to American manufacturing workers, on average, because German workers are more highly skilled. Thirteen percent comes from South Korea, whose median wage isn’t far from our own.

Workers in the United States get only about 6 percent of what you pay for an iPhone. It goes to American designers, lawyers, and financiers, as well as Apple’s top executives. 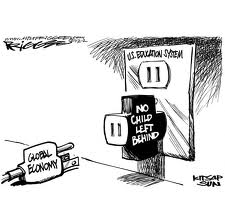 What’s going on? Put simply, America isn’t educating enough of our people well enough to get American-based companies to do more of their high-value added work here.

Our K-12 school system isn’t nearly up to what it should be. American students continue to do poorly in math and science relative to students in other advanced countries. Japan, Germany, South Korea, Canada, Australia, Ireland, Sweden, and France all top us.

American universities continue to rank high but many are being starved of government funds and are having trouble keeping up. More and more young Americans and their families can’t afford a college education. China, by contrast, is investing like mad in world-class universities and research centers.

Transportation and communication systems abroad are also becoming better and more reliable. In case you hadn’t noticed, American roads are congested, our bridges are in disrepair, and our ports are becoming outmoded.

So forget the debate over outsourcing. The way we get good jobs back is with a national strategy to make Americans more competitive — retooling our schools, getting more of our young people through college or giving them a first-class technical education, remaking our infrastructure, and thereby guaranteeing a large share of Americans add significant value to the global economy.

But big American-based companies aren’t pushing this agenda, despite their huge clout in Washington. They don’t care about making Americans more competitive. They say they have no obligation to solve America’s problems.

They want lower corporate taxes, lower taxes for their executives, fewer regulations, and less public spending. And to achieve these goals they maintain legions of lobbyists and are pouring boatloads of money into political campaigns. The Supreme Court even says they’re “people” under the First Amendment, and can contribute as much as they want to political campaigns – even in secret.

The core problem isn’t outsourcing. It’s that the prosperity of America’s big businesses – which are really global networks that happen to be headquartered here – has become disconnected from the well-being of most Americans.

Mitt Romney’s Bain Capital is no different from any other global corporation — which is exactly why Romney’s so-called “business experience” is irrelevant to the real problems facing most Americans.

Without a government that’s focused on more and better jobs, we’re left with global corporations that don’t give a damn.