COMING TO AIRSPACE NEAR YOU: DRONES

BPR Editor’s Note:  Soon more and more Americans will get to know what citizens in Pakistan, Afghanistan, Yemen, and other countries are experiencing: the sight of unmanned aerial drones, sent from mysterious airfields, sent to spy on and sometimes kill people, quite a few of whom turn out to be civilians. The American police state promises to grow and expand in our skies. Groups like the Electronic Frontier Foundation want to expose and restrict drone activity whenever possible.

A series of events in the last two weeks have set the stage for how surveillance drones will be operated by local law enforcement in the United States and how citizens can demand privacy protections as domestic use escalates.

As EFF has previously reported, Congress passed a bill in February mandating the FAA must open national airspace to drones, despite the extensive and unprecedented civil liberties dangers they pose to every American. The FAA, in new rules announced on Monday, made the authorization procedure easier, stating they have “streamlined the process” for “public agencies”—which includes local law enforcement—to legally operate drones in U.S. skies. 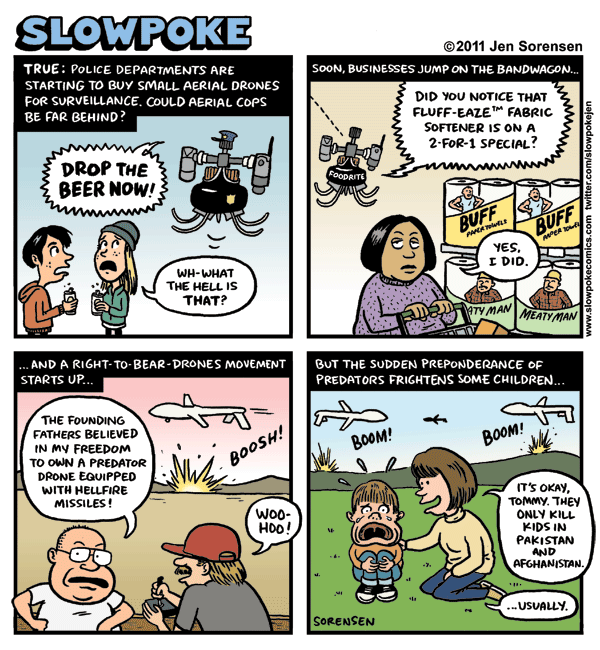 We know that dozens of law enforcement agencies already have drones, based on informationfrom EFF’s Freedom of Information Act lawsuit over the FAA’s initial refusal to release the list of authorizations. And one of the biggest cities with a police department on the list was Seattle.

It turned out Seattle’s city council—which oversees the police department—was just as surprised as many citizens to see Seattle Police Department’s name on the list. The city council learned about the drones through a reporter asking questions related to EFF’s lawsuit, not through official channels. After front page stories in the Seattle Times and an official apologyfrom the Seattle police department, Seattle is now the first city to consider privacy safeguards for drone use by law enforcement.

The ACLU of Washington has asked the city council to pass a legally binding ordinance detailing “what kind of information can be collected, who can collect it, how the information can be used, and how long it can be kept,” along with “an auditing process to make sure the policies are followed.”  The Seattle Times agreed. In an editorial written on May 6, the city’s largest paper urged city council to adopt “usage restrictions, image-retention limits, and regular audits and reviews of drones as a law-enforcement tool.”

Seattle’s Police Department has already pledged drones would not be used for surveillance, and only “for situations like crime scene photography, missing person searches, and barricaded person scenarios.” They’ve also indicated they would work with the FAA to develop privacy policies. But as the Seattle Times noted, privacy safeguards must be implemented by binding ordinance, “not by policy nods, promises and good intentions.”

In a similar incident just yesterday, after the Shelby County Tennessee sheriff’s officerequested two drones as part of a $400,000 Homeland Security grant, the Shelby county commission questioned the Sheriff’s Office on how they would be using the drone and asked them to draw up privacy guidelines. The sheriff’s office promptly withdrew its request for drones. But encouragingly, the commission is still pushing the sheriff’s office for privacy policies. As the Memphis Daily News reported, “several commissioners said they might still pursue setting some guidelines on the use of such surveillance through a memorandum of understanding with the sheriff’s office.”

Responding to an EFF public records request, Miami-Dade County also released information about its drones earlier this week, which it bought using a grant from the Justice Department (DOJ).

The FAA itself estimates that there may be as many as 30,000 drones in the US by the year 2020, and with the loosened restrictions coupled with the Department of Homeland Security and DOJ issuing grants for local police forces to buy drones, it’s imperative that local governments act swiftly to ban surveillance drones outright or institute robust safeguards for their citizens. Americans cannot afford to wait for the FAA or Congress to act.

Does your local police department own and operate a drone? Check out our interactive map here to find out.

EFF would also like your help. In the coming days, we’re going to announce a crowd-sourcing campaign aimed at finding out as much information as possible on each law enforcement agency’s use of drones and how citizens can voice their concerns to their local governments. Right now, if you have any information on how your local law enforcement plans to use drones, email dronesinfo@eff.org. You can get this information by calling your local police department.

And stay tuned for more, as we plan on announcing a detailed campaign soon.

2 Responses to COMING TO AIRSPACE NEAR YOU: DRONES