BPR Quotes of the Day

Thomas Jefferson’s views on who should be paying taxes would clearly disqualify him as a member of today’s Republican Party…..

“The collection of taxes… has been as yet only by duties on consumption. As these fall principally on the rich, it is a general desire to make them contribute the whole money we want, if possible. And we have a hope that they will furnish enough for the expenses of government and the interest of our whole public debt, foreign and domestic.” –Thomas Jefferson to Comte de Moustier, 1790. ME 8:110 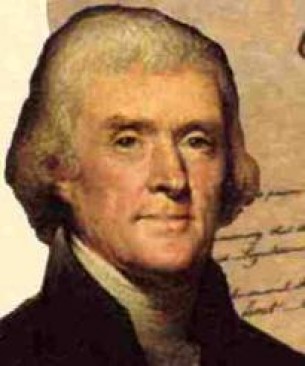 “The rich alone use imported articles, and on these alone the whole taxes of the General Government are levied. … Our revenues liberated by the discharge of the public debt, and its surplus applied to canals, roads, schools, etc., the farmer will see his government supported, his children educated, and the face of his country made a paradise by the contributions of the rich alone, without his being called on to spend a cent from his earnings.” –Thomas Jefferson to Thaddeus Kosciusko, 1811. ME 13:41

7 Responses to Thomas Jefferson: Let the Rich Pay the Taxes