Do You Feel Safe Yet?

BPR Editor’s Update: I cannot confirm the 30,000 number stated in this headline and story from The Intel Hub. Congress did authorize the use of drones within the U.S. but I could not find any specific number in the text of the bill or from any other reliable source.

Once again, another shocking story that threatens the personal privacy of US citizens has been kept from us by our politicians and the mainstream media.

Did you know that a bill, HR 658, the FAA Air Transportation Modernization and Safety Improvement Act, has just passed both the House and the Senate that authorizes the use of 30,000 spy drones over America? Like the anti-Posse Comitatus NDAA legislation that passed in November, this bill was not widely reported by the mainstream media.

Do not feel bad for not knowing about this, because, similar to the anti-Constitutional NDAA legislation, they purposefully tried to hide this from the American public. The corporate controlled mainstream media was once again complicit and was an integral accessory in this crime against “We the People.” The corporate mainstream media failed us all miserably once again.

Think about the enormity of this for a second… 30-THOUSAND drones flying overhead surveilling the US. If you divide that by 50 states, that is 600 drones per state! Most states don’t have even have one-third of that in counties, so 600 drones, or more per state is a bit overwhelming. And considering that some states are very small, such as Rhode Island and Connecticut, it won’t take that many to spy on those diminutive territories, leaving far more drones to cover the larger states. 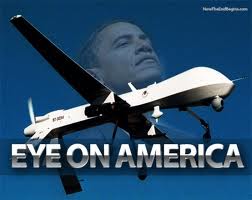 This is an outrage, plain and simple. If you’re not pissed off about this, you’ve got shit for brains. There is no good reason why we should have 24/7 surveillance of American citizens. Of course the advocates for creating this intensified police state will proffer that this is needed “to fight terrorism,” but let’s examine that issue for just a moment.

We’ve only had two successful acts of terrorism in the US, both happening well over ten years ago. It’s not like we’re under a constant monthly or weekly barrage of terrorism, at least not from foreign threats. We’ve been terrorized by our politicians and our media plenty, far more than we have from foreign entities. That’s an undeniable fact. Again, just look at the record.

We had the 9/11 attacks in 2001, and then shortly after we had the anthrax attacks. As we look at both of those events, there is an incredible amount of evidence that points to a false flag operation, state sponsored terrorism by rogue factions within our own government, blamed on a foreign entity. See the NewsFocus reports on the 9/11 attacks and the anthrax attacks.

These plots succeeded solely because of US officials and their dereliction of duty, yet our Constitution and “We the People’ are the ones who have been made to suffer. The highly flawed 9/11 Commission admitted as much.

Senator Mark Dayton excoriated the Commission panel over bald faced lies in their report that attempted to cover up the numerous failures of protocol on that fateful day. Our top officials failed to do their jobs on 9/11, yet no one was demoted in rank and no one was prosecuted for their egregious ineptitude. Bush, Cheney and Rumsfeld all failed to act appropriately, and in fact, acted suspiciously outside the norm of their designated duties.  (Continued)

Read the Complete Story at The Intel Hub

Note: The House voted 223-196 to pass the bill authorizing the drones. The U.S. Senate vote was 75-20. California’s two Democratic Senators, Boxer and Feinstein, voted in favor of the bill. 😦