{Special Report} HOPE AT LAST? THE PATH OUT OF THE AMERICAN NIGHTMARE

I know I don’t have to tell you that the United States of America economically and politically has been heading downhill for several decades. Anyone who has paid attention knows it and it is beyond denying.  The promise of a bright future is an empty dream for the vast majority of our population. Our political leaders appear clueless and impotent, and there is no national consensus about how to get our system to function in everyone’s interest.

As bad as the situation is, we are seeing flickers of awakening consciousness in many places across the country. The desperate decline of our economy is affecting  increasing numbers of Americans, shaking many out of their protracted stupor. Awareness and a need for answers are motivating people to move from their couches to the streets, looking for a way to reverse this unrelenting slide toward third world status.

Two solutions, and the second must piggyback off the first, offer that small ray of hope. The first has already begun, the other will require a perseverance and effort not seen since this country emerged triumphant from the Great Depression and World War II. Both solutions together will be necessary to overcome the apathy, hopelessness, and fear that have sapped the lifeblood from America’s fragile psyche.

SOLUTION #1—The American people, as citizens of many other nations have started to do, have begun and must continue to take to the streets and protest the continued destruction of the American Dream.  American citizens must march and demonstrate in huge numbers or nothing will change. We are seeing signs of a budding protest movement in the occupation on Wall Street, and several other cities. Plans are in the works for major protests in Washington this week on October 7, the tenth anniversary of the unending Afghanistan occupation.

These grass-roots protest movements will have to grow rapidly and exponentially to ensure that the powers-that-be take note and react. What form that reaction will take is uncertain and carries potential danger.

But if the protests wither and die, it would be a major setback to whatever hope remains of restoring democracy in our nation, and would signal the Corporatocracy that their assault on the American middle and lower classes can continue unabated.

SOLUTION #2—Our political system is so corrupted by wealthy special interests that only way to correct the problem is to eliminate private money from our elections. Our political system has become nothing more than legalized bribery. Elected representatives of both major parties make laws and set taxes based on the contributions they receive from multinational corporations, the U.S. Chamber of Commerce, military contractors, and other wealthy special interests. The traditional democratic methods– voting, petitioning, letter writing, the legal system, etc.–are useless matched against corporate lobbyists roaming Washington with unlimited campaign cash.

The landmark  2010 Citizens United Supreme Court ruling set corporations and the wealthy free to spend unlimited amounts of money to influence elections, essentially gutting the time-honored democratic principle of “one man, one vote.” We have a democracy here in name only.

It is obvious to all now that America’s wealth and power has been flowing upward for several decades. Wealth inequality in America is at historic highs. It has gotten so bad that six banks–Goldman Sachs, Morgan Stanley, JPMorgan Chase, Citigroup, Bank of America, and Wells Fargo–have accumulated assets worth as much as 60 percent of America’s Gross National Product, while the 400 richest Americans have more wealth than the entire bottom half of our citizens (150-plus million). The rich and their allies have no intention of slowing down their power and money grab, so it can only get worse.

Private money from corporations, labor unions, billionaires, millionaires and even ordinary people has to be banned, and replaced with a workable system of public financing of elections. Anything less than complete evisceration of private money in politics is futile,  as the cancer of greed always finds a way to metastasize.

The important question American voters must confront is this: do we want our elected officials beholden to wealthy special interests or to the public? If we want the former, we continue as we have. If we want the latter, we have to remove the corrupting influence of money from politics. 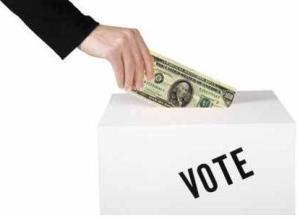 The best scenario for the latter to happen is to use the energy and numbers of the awakening protest movement to raise awareness and understanding to the point that the American people demand that money be taken out of the political system. Solution #1 must work in order for Solution #2 to become the end result.

To change the existing system of institutionalized corruption will require a herculean effort on the part of the American people. The same American people who have been notably absent from direct democracy for decades, who have limited interest in public issues and voting, who have allowed corporate media to lull them into mindless complacency, and who have passively looked on as special interests hijacked the political process and the economy. That will not be an easy task.

Those who have the power in society, and those who pretend to be our representatives, will forcefully resist any effort to change the very system that benefits them. The task of reversing the antidemocratic tide will be monumentally difficult. But it is necessary to start now and undertake the effort, because to do otherwise is to condemn America to the status of a corporate police state with only a small privileged minority enjoying what used to be called the American Dream.

More Americans are waking up to the reality of our dysfunctional system. Political movements  are beginning to sprout up seeking to amend the U.S. Constitution to reverse the Citizens United  Court decision and to remove money from politics. Movetoamend.org, Democracyisforpeople.org and GetMoneyOut.com are among several organizations working for that cause.

Have conditions in this country gotten bad enough to move the American people from their couches to the streets, to rise up and push back with the strength, conviction and numbers necessary to dramatically change our political system?  We don’t know yet, but if it doesn’t happen now, we can’t be sure there will be another opportunity.

2 Responses to {Special Report} HOPE AT LAST? THE PATH OUT OF THE AMERICAN NIGHTMARE