What Do the Democrats Want? No One Knows

In the 1970s, when I was a kid, I asked my mother to explain the difference between the two major parties. “Democrats,” she explained, “are the party of the working man. Republicans represent big business.”

She was a Democrat, obviously. Still, I’m sure Republican families had their version of my mom’s binary, perhaps something along the lines of: “Republicans believe in less government and more hard work. Democrats want high taxes and welfare.”

The two-party system was easy to understand.

Now it’s a muddled mess — especially if you’re a Democrat. 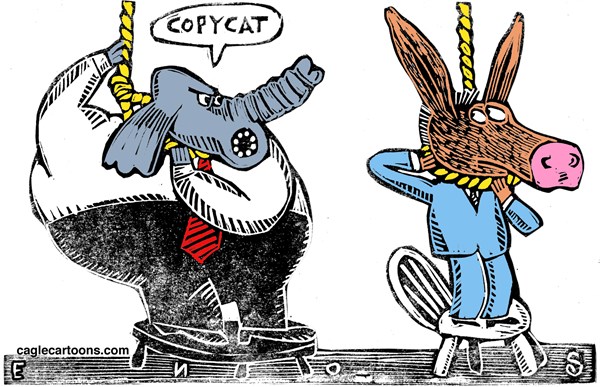 Today’s Democratic Party relies on big corporations, especially big Wall Street investment banks, for campaign donations. The old alliance between the party and labor unions is dead. Democrats support trade deals that hurt American workers. When the economy tanked at the end of the last decade, President Obama left laid-off workers and foreclosed-upon homeowners twisting in the wind; he bailed out the banks instead. Hillary Clinton, who supported the TPP trade deal before she was against it, promised bankers she’d their friend if she won. Whatever the Democrats are now, they’re not the party of working Americans.

So what is the Democratic Party now? What does it stand for and against?

I honestly don’t know. I’m obsessed with politics. So if I don’t know what Democrats want, it’s a safe bet no one else does, either.

“It’s all well and good — and really very satisfying — to harp constantly about the terribleness of Donald Trump,” observes New York Times columnist Gail Collins. “But people need to see the Democratic line on the ballot and think of something more than Not as Dreadful.”

Failure to articulate an affirmative vision of what she was for, not just against, was largely to blame for Hillary Clinton’s devastating defeat. Trump Is Evil and Dangerous wasn’t enough to win in 2016. It probably won’t be enough for 2018 either. Yet party leaders still haven’t begin to say how they would address the problems voters care about.

Like healthcare. The Clintonistas, still in charge of the Democrats despite their incompetent stewardship, believe that Obamacare will survive because the Republicans’ Trumpcare alternative is unpopular even with Republicans. But they’re wrong. In one out of three counties, there is only one insurance company in the local healthcare “exchange.” Zero competition guarantees skyrocketing premiums and shrinking benefits. The collapse of Obamacare makes healthcare the #1 concern for American voters.

What would Democrats do about healthcare if they were in charge?

As far as I can tell, nada.

House Democratic Leader Nancy Pelosi’s website brags about Obamacare and its achievements. “House Democrats,” it says, “continually work to implement and improve health care reform to ensure that the best healthcare system in the world only gets better.” Newsflash to Ms. Pelosi: Actually, the U.S. has the worst healthcare system in the developed world.

When it comes to healthcare, Democrats are just like the Republicans on global warming. They won’t admit there’s a problem. So how can they offer a solution?

They don’t. Even though 58% of American voters want a European-style taxpayer-subsidized single-payer system, the Democratic Party platform does not propose significant reforms to Obamacare.

The wreckage of deindustrialization in the nation’s heartland is widely viewed as key to Trump’s surprise win. So what is the Democrats’ plan to create jobs, increase wages and help victims of the opioid epidemic?

Aside from “Trump sucks,” Democrats don’t much to say.

“We will create jobs that stay in America and restore opportunity for all Americans, starting with raising the minimum wage, expanding Pell grants and making college tuition tax deductible,” the party said in a statement a few days before Election Day 2016. Sounds great! But details are hard to come by.

Last year when it mattered, $225,000-a-speech Hillary asked workers to settle for a $12/hour minimum wage. Now, finally, Democrats are officially endorsing Bernie Sanders’ $15/hour. But it really should be at least $22/hour. And anyway, how would a minimum wage increase, or Pell grants, or tax-deductible tuition, “create jobs”? They wouldn’t. We need a big WPA-style federal hiring program. A law mandating that evil outsourcing companies like Facebook start hiring Americans wouldn’t hurt. But the Dems won’t get behind either.

When Democrats do have something to say, it’s trivial and small-bore, like making college tuition tax deductible. Why not go big? Did you know that the U.S. could make four-year college tuition free for the price of the ongoing war against Iraq?

Why are the Dems so lame? Suspect #1 is the lingering rift between the Sanders and Clinton wings of the party. “There is this grassroots movement voters’ arm of the party, and the more corporate, institutional part of the party. And the movement arm is tired of the institutional part telling us the only place for us is in the streets,” saysNebraska Democratic Party Chairwoman Jane Kleeb, a Sanders supporter. A party split by a civil war between a populist left and a corporatist right can’t articulate an inspiring platform of exciting solutions to American’s big problems. A purge, or a schism, would fix this.

Trump is already one of the most unpopular presidents in history. Going against him ought to be easy. But Democrats are about to find out — again — that people won’t vote for you unless you give them a good reason to get off their couches and drive to the polls.